US warns of limited initial supplies of J&J Covid vaccine 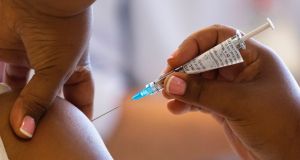 The Johnson & Johnson vaccine being administered to a health worker in South Africa. Photograph: Nic Bothma/EPA

The US government expects to initially receive only a “few million” doses of Johnson & Johnson’s (J&J) Covid-19 vaccine if it is authorised – well short of what was initially promised – and is working with the company to prepare to scale-up production, White House Covid-19 response co-ordinator Jeff Zients said on Wednesday.

Mr Zients said the administration is planning for possible authorisation of the vaccine – which requires one dose – and the contract would be for delivery of 100 million doses by the end of June. Those deliveries would be “back-end loaded”, he said.

“We’ve learned that there is not a big inventory of Johnson & Johnson. There’s a few million doses that we’ll start with,” Mr Zients said during a press briefing.

“We’re doing everything we can, working with the company, to accelerate the delivery schedule.”

In its initial contract with the previous administration J&J agreed to supply 12 million doses by the end of February, including two million it planned to deliver in January. The company says it will ship some doses upon authorisation but declined to specify how many.

J&J “intends to distribute vaccine to the US government immediately following authorisation, and expects to supply 100 million doses to the US in the first half of 2021,” it said in a written statement.

A US government accountability office report published last month said J&J would deliver about two million doses of the vaccine if it receives an emergency-use authorisation. The previous administration had said it was working with the company to speed up shipments.

Food and Drug Administration officials are examining J&J’s trial data, and the agency has scheduled a February 26th meeting at which outside advisers will consider the request for authorisation. That could follow as soon as days after the meeting.

J&J formally applied to the European Medicines Agency for approval to market the vaccine in the EU earlier this week. The EMA said it expects to make a decision in mid-March.

The Biden administration has ordered enough doses from Pfizer and Moderna to vaccinate 300 million people, and says it expects to receive those by the end of July. The J&J doses, if authorised and delivered on time, would add another 100 million doses by the end of June. Administering the shots would take longer.

The US has been struggling to hasten its vaccine rollout because of a limited supply of doses. Pfizer and Moderna have promised to deliver 200 million doses of their two-dose vaccines by the end of March, but so far fewer than 72 million doses have been shipped around the US and around 55 million shots have been given.

The US paid J&J $1 billion in August to help fund the development of its vaccine in exchange for a guarantee of 100 million doses and an option to buy 200 million more. It also provided J&J with $456 million in March.

The Biden administration has promised to explore every option available to aid drugmakers, including J&J, in boosting vaccine production. It said it is deploying wartime powers through the Defense Production Act to help them secure needed supplies.

J&J’s experimental shot involves a single dose and can be stored in refrigerators as opposed to freezers, which could help speed up vaccinations. – Bloomberg / Reuters