Unemployment falls to 5.3% but true figure could be much higher

Rate could be as high as 22.5% if those claiming pandemic payment were included 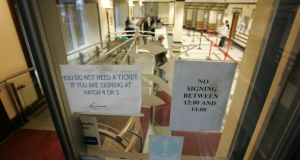 Seasonally adjusted figures showed a total of 131,200 were considered unemployed during June, compared to 137,800 a month earlier. Photograph: Frank Miller

Unemployment fell slightly in June to 5.3 per cent but the coronavirus pandemic continued to hit the labour market, new data from the Central Statistics Office showed.

The rate could be as high as 22.5 per cent if those claiming the pandemic payment were included in the data.

Seasonally adjusted figures showed a total of 131,200 were considered unemployed during June, compared to 137,800 a month earlier. However, the figure was 7,000 higher than in June 2019, when 124,200 people were classed as unemployed.

When those in receipt of the pandemic unemployment payment – who do not meet the agreed criteria to be considered unemployed – were included in the figures, the unemployment rate soared to 22.5 per cent. That showed a rate of 21.8 per cent for men and 23.5 per cent for women in June 2020.

Figures from the last week of May showed 543,164 people were in receipt of the pandemic unemployment payment. More than 400,000 people have benefitted from the wage subsidy scheme.