Uefa’s Ceferin: ‘Good old football with fans’ will be back very soon 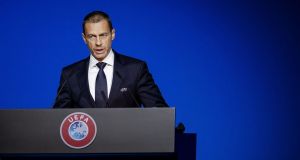 The most important official in European football talks to the Guardian about the coronavirus fallout, how clubs could face a “luxury tax” and why he believes footballers are not greedy. Below is an edited transcript.

How would you describe the current situation and your feelings about it?

There’s a lot of work still to be done. I was in Switzerland last week for the first time in two months and had meetings from 9am to 11pm. There is so much information [to take in] and so many calendar issues – and so many millions and millions, dozens of millions of dollars, that we will lose. It is then hard to fall asleep at night. You would be quite irresponsible if you could fall asleep immediately after a day like that. The situation for Uefa is not that alarming, we’re not in a dangerous situation, but we still care about the clubs and the leagues and the stakeholders so it is a lot of work.

How and when did you decide to postpone Euro 2020? In these kinds of situations do you wake up in the middle of the night thinking about it?

It’s even worse, I couldn’t even fall asleep until 4am. At that time [in the morning] I made the decision [about Euro 2020] and then fell asleep for a couple of hours.

Yes, I would … I don’t know why it wouldn’t be. I don’t think that this virus will last for ever. I think it will [change] sooner than many think.

What gives you that impression?

It’s a serious situation but it is going down now and we are being more cautious. We know more about the virus and in general I’m an optimistic person. I don’t like this apocalyptic view that we have to wait for the second and third waves or even a fifth wave … people you know are likely to die one day, but do we have to be worried today? I don’t think so. We are ready and we will follow the recommendations of the authorities but I’m absolutely sure, personally, that good old football with fans will come back very soon.

Is this going to change football for ever?

I don’t think that anything will change for ever. It’s a new experience and when we get rid of this bloody virus things will go back to normal. Football didn’t change after the second world war, or first world war, and it will not change because of a virus either. People have said many times that the world will not be the same after … this might be true, but my point of view is why not think that the world will be better after this virus? Why not think that we will be smarter, or finally understand how fragile we are, how unprotected we are towards nature? So, there are always lessons to be learned.

What are your thoughts about the suggested new 24-team Club World Cup? You said earlier this year that this could mean the death of football.

What I meant by that was mainly because of the way it was presented. It was presented as if a fund would buy the competition and that the whole competition would be sold. We didn’t have any more information than that and even now I don’t have much more information, but as far as I know the fund is gone and to be honest I don’t know in which direction this idea is going for now. We didn’t discuss it much. I don’t even know when exactly a CWC would be played, so I don’t think there is anything to worry about for now.

Do you still want to launch this third European competition, the Uefa Europa Conference League, or has this situation made you think twice about it?

We will do it, absolutely.

We will not postpone it.

What about financial fair play and its future? Are you still committed to the current rules? And how important is it that the clubs get sanctioned if they disobey the rules?

If they don’t follow the rules they will always be sanctioned but of course we are [always] thinking about how we can improve our regulations and, if necessary, adapt to new times. This will not happen very soon but we are thinking of improving [FFP]; modernising it and doing something more about the competitive balance. We are also considering some sort of “luxury tax”, if it is possible. So, there are many ideas but trust me, during these difficult times we have stopped thinking more or less about changes that will happen in the future. Now we have to steer our ship on to the right course and we are close to doing it. Then, when things calm down, we will go back to the old tasks.

Before the Covid-19 crisis there was the case and sanction of Manchester City. Is Uefa still supporting the chamber’s findings? Are you still fully behind the guilty verdict and the two-year ban?

Look, the decision was made and now the case is at the court of arbitration for sport and Cas will decide. That’s absolutely all I can say, for two reasons. Firstly, the independent bodies made the decision, I didn’t, and secondly, I really don’t know the case [well enough] and I don’t like people who comment about matters that they don’t know well. There are too many people commenting on different topics that they do not have a clue about.

So the possibility of a deal or a settlement outside court is not an issue for you?

I don’t want to comment on this case any more.

Let’s switch to women’s football. How close are we to equal pay for women and men in football?

This is the one-million-dollar question, rather than if the Euros will be held next year. I think it is hard because there is a big difference in the revenue between what men’s and women’s football bring. Uefa is investing a lot into women’s football and we’re very happy with it . Women’s football is increasingly popular… but with equal pay it’s really very hard to say something now.

At the start of the coronavirus crisis the Fifa president, Gianni Infantino, said this was a chance to reorganise and reduce [the amount of] football being played. Do you agree?

I don’t know. I tried to understand what he meant with that but for sure it’s strange that on the one hand you say you [want to]reduce football and on the other hand you propose a new competition called the Club World Cup. Is that reducing the amount of football?

Have you had the chance to discuss it with Infantino?

No, I didn’t have a chance and we don’t discuss much, to be honest. We haven’t talked much during this crisis … but when the time comes, we will discuss it. But I don’t want to speak about his opinion in the media. When there is something official then I will ask for answers.

A lot has been made about players’ salaries. Do you think that players should be a bit more humble and bit less greedy and that clubs should be a little bit wiser with their spending?

I don’t think players are greedy. They are not greedy. The market decides the prices and if you or I would get an offer to be paid $20m per season I don’t think you or I would say: ‘No, no, no, I don’t want to be greedy, give me $200,000.’ So, they’re not greedy: the market decides. But now let’s see if the market response to this crisis means that the prices go down. It’s possible that prices will go down but I don’t think it’s fair to say that the players are greedy, that the players are not fair because their salaries are so high. They also bring a lot of revenue and football is a big industry that pays a huge amount of taxes. The player is also paying huge taxes, so I don’t think that the right word is greediness, or that the clubs should be wiser, because it’s simply the market that decides how the prices are moving.

Sebastián Fest is an Argentinian-German journalist who has covered world football for the past 25 years. - Guardian