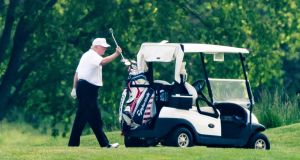 US president Donald Trump plays golf at the Trump National Golf Club in Sterling, Virginia on Saturday. It is the first time the president has played golf since the Covid-19 lockdown. Photograph: Jim Lo Scalzo/EPA

US president Donald Trump has visited one of his golf courses at the start of the Memorial Day holiday weekend as he urged states to reopen following coronavirus-related lockdowns.

However, many Americans remain cautious as the number of confirmed cases across the nation passed 1.6 million.

In California, where many businesses and recreational activities are reopening, officials in Los Angeles County said they would maintain tight restrictions until July 4.

Some religious leaders took issue with Mr Trump’s declaration that houses of worship are “essential” and should resume in-person services this weekend.

Bishop Paul Egensteiner, who oversees the Evangelical Lutheran Church in America’s congregations in New York City, said: “Being at the epicentre of this pandemic and in order to protect our flock, we advise that congregations remain closed until more accurate and uniform information is provided.”

New York state reported its lowest number of daily coronavirus deaths in many weeks – 84 – in what governor Andrew Cuomo described as a critical benchmark. The daily death tally peaked at 799 on April 8th.

Mr Cuomo said: “For me, it’s a sign that we’re making real progress.”

Mr Trump visited one of his private golf clubs for the first time during the pandemic – the Trump National Golf Club in Virginia. He has been pushing for state and local leaders to fully reopen after months of closures and tight restrictions.

In China, new coronavirus cases fell to zero on Saturday for the first time since the start of the outbreak, but surged in India and overwhelmed hospitals across Latin America.

Many governments are easing restrictions as they face a political backlash and historic recessions brought on by the battle against the virus.

In just a few months, the pandemic has killed at least 338,000 people worldwide and infected more than 5.2 million, according to a tally kept by Johns Hopkins University.

Turkey, which has recorded more than 155,000 infections, imposed its toughest lockdown measures yet starting on Saturday for the Eid al-Fitr holiday marking the end of Ramadan.

Yemen’s Houthi rebels urged believers to use masks and stay inside, as authorities try to contain infections at a time usually marked by days of multi-generational feasting and collective prayer.

In Germany, which has drawn praise for its handling of the virus, seven people appear to have been infected at a restaurant in the north-west of the country. It would be the first known such case since restaurants started reopening two weeks ago.

In Frankfurt, more than 40 people tested positive after a church service of the Evangelical Christian Baptist congregation on May 10th. The city’s health office said one is in hospital.

France allowed in-person services to resume starting on Saturday after a legal challenge to the government’s ban on gatherings in places of worship.

One of the world’s major pilgrimage sites is reopening on Sunday – the Church of the Holy Sepulchre in Jerusalem, built on the site where Christians believe Jesus was crucified, buried and resurrected.

Latin America is the latest epicentre of the virus, and experts note the limits of government action in a region where millions have informal jobs and many police forces are unable to enforce restrictions.

Brazil and Mexico reported record numbers of infections and deaths almost daily this week, fuelling criticism of their presidents for limited lockdowns.

But infections also rose and intensive care units were swamped in Peru, Chile and Ecuador – all countries lauded for imposing early and aggressive business shutdowns and quarantines.

Concerns are rising in India, where new cases showed another record jump on Saturday, topping 6,000 for a second consecutive day as a two-month lockdown was eased.

While some countries are facing a second wave of infections, Russia is still struggling with its first, reporting more than 9,000 new daily cases on Saturday. – PA