Travel green list to be updated before being scrapped in October 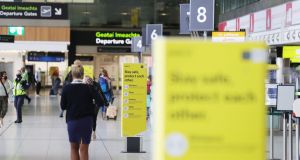 Passenger numbers at Dublin Airport have been hugely reduced as a result of the pandemic. Photograph: Collins

Sweden, Germany and Poland will be among the countries to be added to the Government’s so-called green list of countries people can visit without facing movement restrictions on their return, when the list is updated next Monday.

And the list itself will be replaced by a European Union-wide “traffic-light” system in October.

Minister for Health Stephen Donnelly confirmed at lunchtime on Tuesday that the green list would be updated with countries where the incidence of Covid-19 is currently less than 25 per 100,000 population according to the European Centre for Disease Prevention and Control.

Sweden, Germany, Poland, Iceland, Cyprus and Liechtenstein will be added to the green list on Monday. And Finland, Lithuania, Estonia and Latvia will remain on it.

Italy, Greece, Hungary, Slovakia and Norway are set to be removed. Travellers will have to restrict their movements on return from these countries as incidence rates in these locations exceed the Government’s threshold.

The new green list will be reviewed weekly until the EU-wide traffic system is ready.

The Government continues to advise against non-essential travel for all countries not on the green list.

Under the October traffic-light rules, only a handful of EU countries, including Hungary, Romania, Croatia, France and Spain would remain largely inaccessible to Irish people in the weeks ahead, based on current Covid-19 case numbers.

Green-coloured countries will cover territories where the number of cases is less than 25 per 100,000 people in a 14-day period and the percentage of positive tests is less than 3 per cent.

Countries will be coloured orange if they have less than 50 cases per 100,000.

All countries on the green and amber lists will be open to Irish passengers.

Countries will be coloured red if there are more than 50 cases per 100,000 and people travelling from such countries will have to quarantine for 14 days after their return or will have to have a Covid-19 test to show they are negative.

Speaking at a press conference to announce Ireland’s new medium-term plan for dealing with coronavirus, Living with Covid-19, Taoiseach Micheál Martin, said the Government would continue to work with EU member states to come up with a proposal for travel.

The head of the Irish Travel Agents Association Pat Dawson expressed disappointment at Tuesday’s announcement and described it as “wishy washy”.

He said there was “not much more clarity today than there was yesterday” and the Government “just kicked the can down the road until the the middle of October when the EU rules will be finalised”.

The precise details of the EU-traffic light system will be agreed upon at an EU Council of Ministers meeting on October 15th.

While the traffic light system may mean Irish people will be able to travel more widely across the EU in the months ahead, it could also mean the opposite.

Mr Dawson pointed out that under the new rules, Irish people could be prohibited from travelling across the EU if the incidence of Covid-19 here is above 50 per 100,000 of population.

Mr Dawson stressed that it will still be very difficult for people to plan for holidays or trips overseas even when the new rules come into force.