The Irish Times view on vaccine passports: reasons to be cautious

Some form of vaccine certification makes sense, but the details require careful consideration 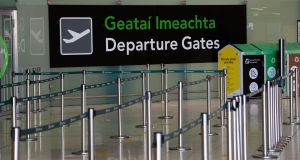 A number of tech companies are working on a digital passport that would allow the vaccinated to breeze through airport security with a quick scan of their phone. Photograph: Colin Keegan/ Collins Dublin

Certificates of immunity are not a new concept. Many countries require incoming travellers to have a yellow-fever vaccination card, and it’s over a century since the “yellow card” was introduced as an international record of inoculations against cholera, typhus, yellow fever and smallpox. But the idea of a “vaccine passport” to allow social and economic activity to resume after a year lost to the Covid-19 pandemic raises new and urgent questions.

As the rollout of vaccines picks up pace, the clamour grows louder for a system that would permit people who have already had their shots to move around more freely, enabling airlines, hotels and other businesses to reopen safely. Spain and Greece, which rely on tourism, have called for a European certification system. In the United States, president Joe Biden has asked for an evaluation of the idea. A number of tech companies are working on a digital passport that would allow the vaccinated to breeze through airport security with a quick scan of their phones.

But there are good reasons to be cautious. First, we need to know more about how the vaccines protect us. We know that all approved vaccines offer a high level of protection against severe disease, and most of them offer extremely high protection in general, but while it is hoped they will also reduce transmission of Covid-19, we don’t know by how much. The forms of resistance that certain variants will put up against individual vaccines is also still to be fully understood.

Some form of vaccine certification makes good sense. But what advantages that document bestows on its owner – and what disadvantages it implies for the have-nots – require careful deliberation. The uneven global availability of vaccines to date has been a shameful reflection of structural inequalities. It cannot be that the rich would be allowed to go on holidays and enjoy a quasi-normal life while those in poor countries are forced to stay put and, in many cases, continue to battle a disease for which they have no protection. Within countries, the structure of rollout schemes, which prioritise older citizens, could result in unfair discrimination against younger people, many of whom have suffered from loss of education and social development during the pandemic.

Would the passport also bestow privileges on those who have already had Covid-19 and, therefore, have antibody levels that may protect them against reinfection? And do we really want to trust Big Tech with the private medical data of billions of citizens around the world?

Some form of certification is perhaps inevitable. Most likely, it will result in those with vaccinations having to meet fewer conditions for travel or access to services. But any system must be genuinely global, it must be fair, and it must not further entrench the alarming inequalities that the pandemic has already made worse.