It’s difficult to understand how, six months into the pandemic, the authorities are having to reverse a sensible decision on serial testing in high-risk food plants because of a sudden rise in testing referrals 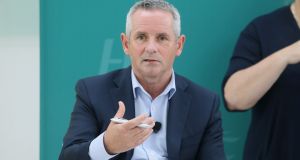 It was to the State’s credit that it realised early in the Covid-19 pandemic that mass testing was the key to containing the disease. While other countries either failed to grasp the importance of tracking down cases rapidly (England) or deliberately chose a different approach to tackling the crisis (Sweden), the Republic was quick to take on board the World Health Organisation’s mantra: “test, test, test”. But understanding that testing was vital was one thing. Building an infrastructure to make it happen, it turned out, was quite another. On March 19th, a week after the closure of all schools and colleges, then minister for health Simon Harris announced that within days the State would be in a position to carry out 15,000 tests a day. When it emerged that the HSE believed there was no chance that target could be met, Harris retreated and accepted it would not be met until mid-May. A revised target of 100,000 tests a week, or almost 14,300 a day, became the new commitment.

Testing did not reach that level. Months passed. A lull in cases through early summer caused demand to drop, giving the health service time to regroup. The assumption was that extra testing capacity would allow for the rapid detection and suppression of the virus when it returned. Instead, the system was scaled back. Then, in August, the numbers started creeping up again. Today, the rate of increase is causing alarm and demand for testing is spiking again. Minister for Climate Action Eamon Ryan’s remark that the test-and-trace system had been “caught off guard” by the late summer resurgence was disputed by the HSE, but it’s difficult to understand how, six months into the pandemic, the authorities are having to reverse the eminently sensible decision to carry out serial testing in high-risk food plants because of a sudden rise in testing referrals this week. And this at a time when, excluding worst-affected counties such as Dublin and Limerick, infection rates in much of the country are relatively stable. None of this augurs well for the coming months, when things are almost certain to get worse before they get better.