The Irish Times view on Covid-19 restrictions: an all-island approach is vital 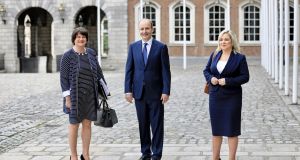 The failure to deal with the Covid-19 crisis on an all-Ireland basis is a threat to public health on the island. The problem is hardly new: from the earliest days of the pandemic, the lack of cross-Border co-ordination blunted the effectiveness of public health restrictions in both jurisdictions. The Government blamed the Northern Executive – by which, implicitly, it meant those unionist parties who preferred to cleave to London’s approach over Dublin’s. For her part, First Minister Arlene Foster criticised the Government for failing to communicate, complaining that the authorities in Belfast learned about the Republic’s lockdown plans through the media.

In an attempt to address these problems, a memorandum of understanding was agreed between North and South in April, recognising a “compelling case for strong co-operation, including information-sharing and, where appropriate, a common approach”. When the Government announced an accelerated roadmap for reopening in June, it made a point of stating that the Executive was informed in advance. More recently, there has been regular contact between the two chief medical officers and between senior Ministers North and South.

Yet the events of the past week have underlined that problems persist. The Executive, grappling with alarmingly high incidence of the disease, belatedly took steps this week to staunch transmission by ordering the closure of the hospitality sector for four weeks and extending the school midterm break to two weeks. If we had a functioning cross-Border response, this announcement would have been co-ordinated between Belfast and Dublin. Instead, a day later, the Government announced that three Border counties – Donegal, Cavan and Monaghan – were to move to Level 4 restrictions. Yet glaring inconsistencies are apparent: retail outlets will close in Emyvale, Co Monaghan, but not a few minutes up the road in Aughnacloy, Co Tyrone. Children will remain at school in Emyvale but will have to stay at home on public health grounds in Aughnacloy.

Meanwhile, notwithstanding the fact that Covid-19 tracker apps in each jurisdiction are compatible, a genuinely cross-Border contact tracing system remains a long way off.

Ireland is at a critical point in the battle against Covid-19. The disease could yet spiral out of control, forcing the island into another prolonged lockdown, with all the damage that would do to livelihoods, mental health and young people’s education. But it remains in our control: with the right policies and appropriate individual behaviour, the current surge in transmission can be halted. For that to happen, however, Dublin and Belfast must suspend the rules of normal politics, recognise that only an all-Ireland approach can effectively fight the virus, and act accordingly.