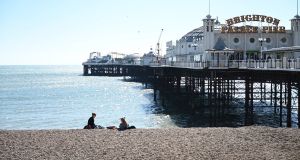 People sit apart on the beach near the pier in Brighton, Britain, on Sunday. Prime minister Boris Johnson has urged UK citizens to avoid unnecessary social contacts, and to work from home where possible. Photograph: Neil Hall/EPA

Thursday’s press conference by the British prime minister was vintage Boris Johnson. In “war” mode, full of his beloved Churchillian rhetoric, Johnson sought to reassure as he encouraged the bulldog spirit. He declared repeatedly “I’m very confident we’ll get this thing done.” Better still, Britain could “turn the tide” within the next 12 weeks. “We’re about three days off him telling us we can take back control,” a British columnist observed. But the rhetoric that won Brexit is not going to win against this pandemic.

What the public everywhere need are leaders they can trust with a consistent, coherent message grounded in science, delivered without embellishment. In the UK they have neither trustworthy messenger nor consistent message.

The response to the claim that the UK has squandered time in responding to the crisis is that harsher measures may well become necessary, but it is necessary to delay their introduction. Notionally because those locked down may lose patience and break their social isolation early.

That’s all very well in the earliest stages of a pandemic, but not once its deadly course is clear from the experience of others, whether China, South Korea or Italy. But the logic serves as useful cover for u-turns – “we had such measures in our armoury, but were just waiting for the right moment. Which is now.”

Britain has been slower than other European countries to close schools, ban sporting events or take other, drastic steps to suppress infections. Crowds in public places are evidence that the social distancing message has not been persuading.

Instead the UK has taken a less socially disruptive path of trying to slow but not stop the spread of the virus – “mitigation” – partly in the hope that this would build up “herd immunity” and avoid future outbreaks. Last week was the time for a belated u-turn, although without acknowledging it as such, with the publication on Monday of Imperial College London research warning that a more-of-the-same mitigation strategy could cost up to 250,000 lives in the UK, and that “suppression is the only viable strategy”.

The UK has much to do to catch up. Low levels of testing for the virus and virtually no contact tracing reflect practices far from those recommended by the World Health Organisation. And doctors and health professionals are deeply alarmed by what they say are grossly inadequate levels of personal protection equipment available to front-line personnel. Social distancing must be ramped up.