The importance of small gestures in relationships during the pandemic 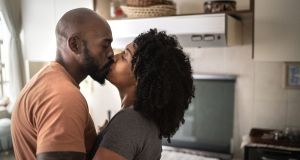 Hugs, holding hands and kisses are simple romantic gestures that can be done every day. Photograph: iStock

In our kitchen when I was growing up we had a wooden armchair which, it was understood, was my mother’s chair. The chair sat beside the stove/cooker in a position from which the farmyard and anyone coming into it could be observed.

Every evening when we were having our tea (dinner was in the middle of the day; lunch hadn’t been invented) my father would carry the chair from its place beside the cooker and set it down at the table for my mother to sit on. He did this throughout their marriage.

As children, we didn’t give this ritual a thought. I recalled it recently though when I was reading a piece by therapist and author Terry Gaspard on the importance of small gestures in marriages and, I guess, in any long-term couple relationship.

Avoiding prolonged silences after a fight values words as communication

With couples cooped up together as we have been for so long, the getting-on-each-other’s-nerves-ometer must be going off the scale for people all over the planet. “I only want to be with you” might have felt better as a statement of affection than as an unrelentingly lived experience.

Gaspard in her article on the gottman.com blog urges us to think small. Big, rare surprises – the diamond ring inside a box inside a box or the surprise, lockdown-smashing, romantic holiday in Lanzarote – have the disadvantage that because they are big they are rare.

Things you can do a little and often might have a more constant and lasting effect. Hugs, holding hands and kisses count for more because they are part of everyday life. Marriage guru Dr John Gottman suggests six-second kisses (though in light of Irish inhibitions, better make that three seconds).

Note that those examples of hand-holding, hugs and kisses are actions, not words. Romantic and considerate actions have more impact on the well-being of the relationship, according to research quoted by Gaspard.

Which isn’t to say words are unimportant. Listening to your partner venting about his or her work mostly involves words (theirs) and is an act of love especially if you were sitting across the kitchen table from them all day.

Avoiding prolonged silences after a fight also values words as communication. It doesn’t matter if the words are only about which colour bin is due to go out tonight – if they break those debilitating silences they are golden.

In general a good rule about fights is that what counts isn’t not having them – since they’re inevitable in a relationship – but how long it takes you to get over them, according to Gottman’s (he of the six-second kiss) research.

To all this I would add that discussing differences when you are both in a good mood often works out better than bringing them up when everyone is in a bad temper.

Respecting each other’s need for their own space is also a gesture of love in these times. Maybe your partner wants to go for a walk on their own or to spend time alone in their room. Usually, this isn’t a slight – freedom, space, autonomy all sum up a basic human need and being sensitive to that can make all the difference to your partner’s mood.

This isn’t easy when you have children busily generating wants and needs. If you can somehow manage to create child-free moments for your partner then you’ll be giving your other half a welcome gift of space.

It’s not all about being alone though. One study found that your blood pressure falls when you are with with your partner without anyone else present. Now, if there’s just you and your partner and you’ve been stuck together through two or three lockdowns you might find that hard to believe – you can get too much of a good thing.

But if you have children in the house, and if it can safely be done depending on their age, then instead of turning to the laptops immediately once they’ve vamoosed, maybe you could have a few minutes of us-time.

And if that involves a six-second kiss, good luck to you.

Padraig O’Morain (@PadraigOMorain) is accredited by the Irish Association for Counselling and Psychotherapy. His latest book is Daily Calm. His daily mindfulness reminder is free by email (pomorain@yahoo.com)