Teachers should be prioritised for the Covid-19 vaccine, says union 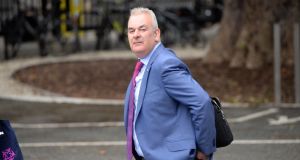 John Boyle, general secretary of the INTO, says all staff who work in schools should be prioritised for the Covid-19 vaccine when it becomes available. Photograph: Dara Mac Dónaill

All staff who work in schools should be prioritised for the Covid-19 vaccine when it becomes available, the country’s largest teachers’ union has said.

The Irish National Teachers’ Organsation (INTO) will tell the Oireachtas education committee on Thursday that the Government should have provided a free flu vaccine to all teachers earlier this year.

“We insist that when the Covid-19 vaccine becomes available that all those who work in our schools be prioritised for this vaccine,” INTO general secretary, John Boyle, will tell the committee.

He will also call on the Government to send a strong message to families who travel abroad over Christmas that children will have to restrict their movements in line with public health advice prior to returning to school.

The INTO, along with the Teachers’ Union of Ireland and the Association of Secondary Teachers Ireland (ASTI), are due to appear before the committee to discuss issues facing the sector.

In a joint statement, all three unions have said the “scandal of unequal pay” must be resolved “once and for all” within the next public sector pay agreement.

“It is grossly unfair to breach the ‘equal pay for equal work’ principle at any time and it is deeply offensive to all teachers, who have done so much to reopen and keep our schools open during the pandemic,” it says.

The next pay agreement is likely to run between January 2021 and December 2022.

Teachers hired since 2010 are on lower payscales than their more experienced colleagues and are not eligible for qualification allowances.

While the gap in earnings narrows over time due to newly-adjusted payscales, so-called new entrant teachers still stand to lose out by close to €100,000 over a life-time, according to independent research.

Mr Boyle will tell the committee that issues around contact tracing are being dealt with more more efficiently and effectively since schools returned after the mid-term break.

However, he says principals along the Border need extra support due to the disconnect between public health authorities in both jurisdictions.

Mr Boyle will also say funding provided to clean classrooms is “totally inadequate” and is likely to be used up by Christmas in many cases.

The €25 per pupil additional capitation grant for enhanced cleaning in primary schools works out at only €3.50 per day extra to clean a classroom.

In addition, minor works grants announced last week will not be sufficient for the installation of air-monitoring systems.

He will also say the €50 million budget for digital learning must be allocated fairly bearing in mind that “primary schools have always been short-changed on ICT funding”.

In addition, he will say about 1,000 schools which are outside the supply panel scheme are struggling to source substitute teachers.

“We must expand this service early in the new year,” he says.

In relation to vulnerable children with special needs, he says it is imperative that additional resources and supports are invested to support pupils who have been impacted most by closures.