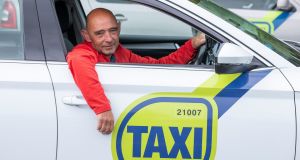 Declan Peelo says his income has been reduced to between 30 and 50% of pre-Covid takings, depending on the day. Photograph: Tom Honan/The Irish Times.

In the taxi-waiting area at Dublin Airport on a recent Sunday morning drivers were playing cards, reading newspapers and walking lengths of the bay for exercise until called up to the rank at Terminal 1 for a fare.

Taxi drivers countrywide have reported slow business. Even though the most severe coronavirus restrictions have lifted in most counties, the closure of pubs, tourism, events and working from home means business has declined.

Colm O’Brien said on one shift last week he was waiting five hours before he got a fare.

“I arrived here one day last week at 6pm, I had a zoom meeting at 8pm and I was still here for it. I was still here until 10:55pm and eventually got a job at 11:05pm,” he said. “Now that is unusual on that end, the average is normally three hours.”

Declan Peelo said his income has been reduced to between 30 and 50 per cent of pre-Covid takings, depending on the day.

“The stories that there were loads of Americans coming in, that’s just not true. It’s all either Irish people who live abroad coming home, or foreign workers who were stuck somewhere else coming back.”

If the airport is so quiet, has he considered going elsewhere to get work?

“The city centre is the exact same,” he explained. “Instead of trying to decide where I’m going to work, now I’m basically just deciding where I’m going to park. I get maybe three jobs a day now. Before Covid, I could get seven or eight.”

There are 26,371 valid taxi licences registered with the National Transport Authority. A spokesman said about 55 per cent of the suspended licences have been reactivated. He added that this figure “aligns” with anecdotal information suggesting which business is 30 to 50 per cent of normal.

“However late night and weekend business, trips to and from airports and business around major public events and tourism remains vastly reduced,” he added.

Jim Waldron, a spokesman for the National Private Hire and Taxi Association, which represents some 5,000 drivers, said the income for taxis has been massively reduced and some drivers are now working around the clock to make enough money.

“What’s happening is the guys are working a 12-hour day instead of eight to try and get a full daily income. In 12 hours, they’re still not earning what they got in the eight hours,” according to Mr Waldron.

“At the moment, fellas are probably earning about €6 an hour. There would be exceptions, depending on what jobs you get. I’m aware of fellas being out there working 24-hour shifts, on the basis that they had to get money.”

Joe Fagan, who has been a taxi driver for 35 years, said the industry has never been in such a bad situation. Joe Mulholland said the costs were beginning to build up for him, putting him under pressure.

“I still have to pay my insurance, my licence, my NCT, my suitability test. I just installed a screen for €250 that I won’t get back. So the costs are the same, but I don’t have the business coming in.”

Stephen Kearns (30) decided to stop driving after almost eight years in the industry because he was not making enough money. He is now in the process of setting up his own landscaping business.

“I had to leave the business. I have a family to support. You could be doing a 10-hour shift and getting €100 but by the time you take your expenses out of it, you’re getting €5 an hour,” he said.

“Luckily I had another skill. I’m a a qualified bricklayer so now I’m in the early stages of setting up a landscaping business. I’ve work booked for the next six weeks. I really enjoyed it [taxi driving] but it had to be done. It wasn’t feasible.”

Anti-lockdown protesters in London told violence will not be tolerated