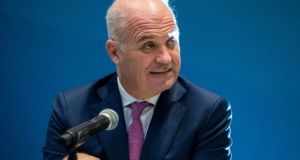 The Government has put various measures in to try and de-fang the Nphet suggestions before they come to Cabinet. File photograph of Nphet chairman Dr Tony Holohan: Colin Keegan/Collins Dublin

As recently as 10 days ago, the number of new Covid-19 cases being diagnosed was collapsing, seemingly clearing the way for a smooth exit from Level 5.

However, a stubborn upsurge since then risks exposing old fault lines between the Government and the National Public Health Emergency Team (Nphet). A row between public health experts and senior officials, revealed by The Irish Times on Thursday, may be just the beginning.

As health officials meet today to consider the crucial next steps in managing the pandemic, just how is Covid policy formed, and who calls the shots?

The ultimate arbiter of Covid policy is, objectively, the Government. All parties have agreed on this, and in public and private members of Nphet defer to the Government on decision making.

However, there has been for some time a growing sense in some quarters of Government that the weight afforded to Nphet pronouncements - and the manner in which the Chief Medical Officer Dr Tony Holohan, in particular, makes his arguments - has de facto shifted a lot of power towards the public health team.

While few, if any, doubt the motivations of Nphet, the argument goes that it is a temporary advisory body, set up for a discrete purpose. Yet it now has extensive agenda-setting powers which can shift the debate to suit its goals. When the numbers are bad, these always favour caution and the introduction of new restrictions. This, in turn, reduces the Government’s room for manoeuvre, forcing it to react to Nphet views - to play on the defensive.

The Government has put various measures in to try and de-fang the Nphet suggestions before they come to Cabinet. A senior officials group led by the State’s most senior civil servant, Martin Fraser, is supposed to vet Nphet recommendations, before they are sent to a Cabinet sub-committee of party leaders, Green deputy leader Catherine Martin, the Minister for Health and the two financial ministers. The problem, Government sources say, is that these bodies are taking Nphet policies, not designing the policies themselves.

Also, the simple fact is that these mechanisms are often overtaken by events. The thing about public health advice is that when it’s urgent, the idea is it should be enacted quickly. When it’s mixed with a heady political cocktail as currently exists, the situation is more volatile still.

Take, for example, the first recommendation that the country move to Level 5 of the State’s Living with Covid plan; given such dramatic events, the tools put in place to give the Government control of the situation were simply overwhelmed.

There was, of course, a widespread conviction in Government circles at the time that Nphet was responsible for the leak of its recommendation to move to Level 5, offered up as proof positive that the coalition was being “bounced” into stricter measures. This, and the tumultuous fallout, damaged the relationship between Nphet and Government. This was copper-fastened by further intense pressure from Nphet to move to Level 5, which the Government finally conceded on before the full impact of a ban on household visits could be seen.

All of this would be a little academic if the disease was performing as the Government and Nphet hoped it would, and as it seemed to be doing 10 days ago.

When the downward trajectory was in place, sources with knowledge of Nphet’s discussions spoke of a Christmas with looser rules on household gatherings, and some indoor dining permitted. However, with numbers not declining as quickly as hoped, there seems to be an inevitability that Nphet’s advice will not match up with the Government’s aims for unlocking society.

The Government, perhaps pre-emptively, has begun to try and frame the coming weeks from its point of view. A Dáil debate has been convened for next week, so that “all perspectives” can be heard - the subtext here is clear: not just the public health perspective. Taoiseach Micheál Martin last night told his Fianna Fáil parliamentary party that the intention is still to exit lockdown after six weeks, and that an enjoyable Christmas is in store, with “personal behaviour” emphasised.

Again, the implication is clear - citizens’ own behaviours, not the threat of further coercive measures, are at the core. The Departments of Finance and Public Expenditure and Reform, and Martin Fraser’s group, have been arming themselves with reams of statistical analysis to buttress their arguments this time, sources said. And Fraser himself is said to be fond of reminding politicians: “Youse are the Government.” Sources expect that among the major points of contention will be the treatment of indoor hospitality.

The deterioration in case numbers also provokes a wider question for pandemic policy writ large: if numbers remain high despite an extended period of Level 5, that suggests there is no weapon in the State’s current arsenal capable of pushing them down to levels seen in the summer.

Recent experience suggests there when restrictions are not as onerous, control measures like contact tracing are overwhelmed when the virus is concentrated beyond a certain level. Where this leaves stated policy goals like “living with the virus” or “crushing the curve” is unclear.

The stakes are incredibly high for decision makers in the coming weeks. Lives, and livelihoods, are in the balance. The subtle differences in public health advice will matter hugely - some will live or die by them. Businesses will survive or fail because of them.

Yesterday’s clash between senior officials and Nphet may be the first visible skirmish, and the prelude to much bigger battles.