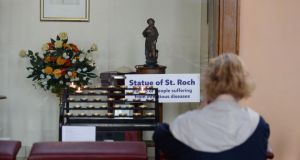 The St Roch statue has become a focus of prayer at the Church of Our Lady Help of Christians on Dublin’s Navan Road since it re-opened for private prayer recently. Photograph: Alan Betson

A religious statue which is credited with ensuring one Dublin parish did not succumb to the Spanish flu a century ago has become a focus of prayer in recent weeks.

The sculpture of French-born medieval St Roch (pronounced “rock”), who died in 1327 and devoted his life to helping the plague-stricken and the sick recently, was returned for prayer at the Church of Our Lady Help of Christians on Dublin’s Navan Road.

St Roche was said to have cured plague victims he visited in Italy with his prayers and by marking the sick with the sign of the cross, according to the Navan Road parish newsletter.

However, the St Roch statue was moved from its original location at the Daughter’s of Charity Centre at St Vincent’s on the Navan Road, when the nuns moved to Blackrock, Co Dublin.

Over recent weeks, “based on folk memory in the parish” about its role in the 1918/19 pandemic, Navan Road administrator Fr John O’Brien contacted the nuns at Blackrock about its return. Sr Goretti there located St Roch and the statue was brought back.

It is now in a glass-fronted shrine at the parish church where Fr O’Brien said, there was “a constant stream of people” taking part in private prayer while respecting social distancing rules.

“The church is open for private prayer daily, from 10am to 4pm,” he said.

“The priority is to encourage people to pray,” said Fr O’Brien, “and the shrine helps in that, which is good”. Currently social distancing means “two people per pew, with one at either end, and there’s gel people use coming is and leaving”, he said.

People were “very particular about respecting social distancing”, he said

The church building has a capacity of 1,200 but, he believed, when public Masses return there, maximum capacity allowed will be 100. People might also take part in the car park and there was a school hall where Mass could be seen on webcam. But “attendance at Sunday Masses will be a big issue”, Fr O’Brien said.