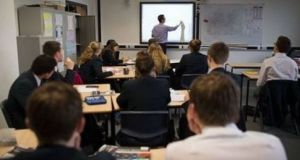 Teacher staff rooms and school break times are an area of concern for the potential spread of Covid-19, according to a mid-term review of schools compiled by public health authorities.

Overall, the review found schools remain safe with very limited evidence of transmission of the virus.

The report found the proportion of close contacts of pupils or staff who tested positive remained low, despite high levels of community transmission across Ireland, particularly in Dublin, during October.

However, in a series of recommendations, it says the support of education partners will be key to minimising close contacts in staff rooms and at break times.

The report says friendship circles, lunchtime activities, break time activities and supervision have been “highlighted as areas where close contacts have often been identified”.

In addition, it says staff rooms have “not infrequently” been highlighted as an area of concern for potential for infection transmission, resulting in a significant number of staff members being identified as close contacts.

The unpublished midterm report was completed at the end of last month for the HSE’s office of the clinical director of health protection.

It concludes that schools should remain open and that it is important that there is no laxity or slippage in health precautions.

It also notes that the support of public health authorities to support schools was “severely challenged” due to the second wave of cases before the midterm break.

Additional supports have subsequently been added with the redeployment of staff from the Department of Education’s inspectorate.

A total of 757 schools or pre-schools recorded a positive Covid-19 case up to the end of October and required a public health risk assessment along with follow-up testing.

This equates to a positivity rate for close contacts of 2.9 per cent, compared to about 10 per cent for the community.

These positivity rates are lowest in secondary schools (2 per cent), followed by primary (2.7 per cent), special education (3.3 per cent) and childcare facilities (5 per cent).

The report shows that that fewer than five schools were required to close in the period up to the end of October, though others closed “voluntarily” due to staffing problems linked to teachers self-isolating.

It says public health authorities have not routinely required the exclusion of classes, reflecting the mitigation measures put in place by the schools and the assessment of these as part of the clinical public health risk assessments.

It adds that the definition of close contacts used in Ireland differs from the EU agency the European Centre for Disease Prevention and Control (ECDC).

It says their guidance would “likely result in frequent larger scale exclusions of classes”.

It adds that ECDC guidance is currently under review, while the UK approach is similar to that currently taken in Ireland, although it says Ireland undertakes “greater testing of close contacts and has recommendations for face-coverings amongst other mitigation measures”.

Overall, it says there have been almost 70 instances where there were outbreaks in schools where it was “likely” that the virus spread within the school.

Where this transmission may have occurred, the onward numbers infected have been, on average, three cases.

The report says the first half-term required intense input from departments of public health to support schools. In line with a sharp increase in cases of Covid-19 nationally, many cases were identified among those routinely attending educational facilities, either as staff or students.

While there was “angst” around schools being open amid rising Covid-19 cases, it says many school principals were very co- operative in their approach and understanding of the public health approach .

It says public health risk assessments are being undertaken in education settings when cases of Covid-19 have been identified during an infectious period, defined as 48 hours prior to symptom onset or 24 hours prior to test for asymptomatic cases.

It also says notifications from the HSE’s Covid-19 Tracker App have caused confusion for teachers and principals.

The report says a determination of close contacts should be based on a public health risk assessment and not a notification from the app,

This is because the assessment is a “carefully considered determination of likely disease transmission within the setting, taking account of case and close contact factors, in conjunction with mitigating measures”.