Sean Moncrieff: For the moment, parents can only be ‘good enough’ 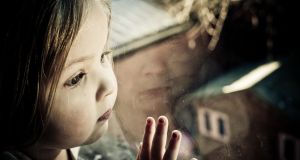 The process of growing up is not one entirely controlled by parents. It never was. Photograph: Lisa Howard/Getty Images

Here’s a typical morning: Daughter Number Four, having risen at her usual ungodly hour, says she doesn’t want breakfast. I nag a bit and eventually she relents. But she eats in the company of a toy piano that plays mind-skewering beats while she tunelessly hammers the keyboard.

It’s difficult to keep the irritation out of my voice when I say to her: please, not at this hour. It’s 6am. She stops playing, but doesn’t eat breakfast either. Instead she runs upstairs to grass me up to her mother. She does that a lot.

She’s four. She hasn’t a clue what’s going on. Before lockdown, she’d had chicken pox and had only been back at creche for a week before it closed down. We’ve explained that people are sick and that’s why everything is closed, so she assumed that everyone else had chicken pox. She couldn’t understand why everyone else didn’t get better, as she had. She would ask: are the people better yet? And then she stopped asking.

Instead she came up with other ways to explain the silence. She started to say that she couldn’t see her friends because none of them liked her anymore. One thing we can still do is feed a family of ducks that live near our house. But one day they weren’t there. She said: now the ducks don’t like me.

After coming down from her b***h-fest with mammy, she asks for the TV, which I give into. But that doesn’t last long. Even while writing this, she’s been in and out to me several times. Just for a cuddle.

There’s only so much you can do. We’ve hit the outer wall of parenting

A phrase I’ve repeated to myself a lot over the last couple of months was one much used by the child psychologist, the late David Carey: you don’t have to be a good parent. Just good enough. But even being good enough is difficult now.

I’m guessing we’re not the only ones. Of course, if you go on social media you’ll still see the virtue-signalling parents with their daily Zoom yoga classes and baking sessions. Everyone eating giant bowls of vegetables and speaking fluent German.

But I’m guessing they may now be a minority. Mostly, there are the frazzled, guilty parents, with children who won’t eat or who act out or have mood swings. They have to act as parents, but also as friends because the child has no one else to play with. They’ve become lax on screen-time and the number of treats. Because there’s only so much you can do. Because they’ve hit the outer wall of parenting.

I’m guessing too that my family are among the luckier ones. At least Daughter Number Four has parents and siblings to occupy her. Try doing it alone. I can’t imagine how difficult that is.

Obviously, we have to be careful about how we gradually come together, and young kids are the trickiest in this regard. They don’t do social distancing. But these children are suffering from the lockdown in a way that perhaps the rest of us are not: because they don’t realise what it is they are missing, and what it is they need. The process of growing up is not one entirely controlled by parents. It never was. Children are not simple organisms that react in predictable ways if they are given the correct amounts of water and food and light.

Children are also raised by their teachers, sports coaches, grandparents and most importantly, their friends. It’s how they learn about sharing and arguing and loyalty and trust: all the things they will need to know as they develop into adults; things that can only be learned through doing, not being told about them. And for many parents, for me, it’s a soft torture knowing what your child is missing and not being able to provide it for them.

For the moment, though, we can only be good enough. But honestly, that’s not great.