Prefabs not a ‘quick fix’ solution for extra classroom space 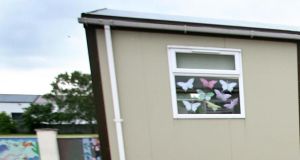 Prefab manufacturers have reported an increase in demand from schools for temporary classroom accommodation, as principals grapple with how to safely reopen schools amid the coronavirus pandemic.

On Monday, the Government published guidance for how schools can reopen in late August, which will include advice on how to maintain physical distance between pupils.

Companies that supply modular accommodation have reported an increase in interest for prefab classroom units in recent weeks, as schools attempt to secure additional space.

Deirdre McCabe, director of Co Kilkenny-based company Roadmaster, said it had received a spike in calls from school principals in the last two weeks.

However, ordering classroom prefab units would not be a “quick fix” for schools as the process can take up to six months, Ms McCabe said.

Schools would need to apply for planning permission and in many cases go through a value-for-money procurement process as well, she said.

“A lot of the stock is exhausted by others who got in earlier,” she said. There had been a “huge uptake” in demand from the Health Service Executive, and other companies returning to work in the weeks following the national lockdown, she said.

“If a school rang us today, I would tell them they need planning permission – for that, six months would be the norm,” she said. Prefab units now have to adhere to much stricter regulations than in previous decades, she said.

Schools could proceed anyway and then apply for planning retention from their local authority after the fact, but that would be “unlikely”, Ms McCabe said.

Without some temporary national derogation, planning authorities would likely take a dim view if schools across the country put in extra accommodation without planning permission, she said.

Stock of prefabs and temporary cabins was also “very low in the country” currently, she said. “Our books are full until November. I can’t start building a classroom until November,” she said.

Principals charged with reopening schools had a “tough road ahead”, and often were not aware prefab classrooms required planning permission. “It’s generally a three-to-six month process. How do you bring that down to three weeks?” she said.

“However, this year we are seeing a marked increase in inquiry traffic as the schools prepare to reopen under the Covid-19 reality,” he said.

“The timescale is tight but we will be working hard to accommodate as much as we can,” he said.

Mr Murphy said he had received five or six calls on Monday alone from schools querying availability, and expected there to be a rush on orders in the coming week.