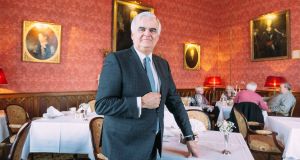 Hotelier Aaron Mansworth has already had to temporarily close one hotel at Cork Airport as a result of Covid-19.

Now, with the Ryanair decision to pull the plug on its base at the airport for the winter, he is facing a battle to retain jobs at their remaining business on site the Cork International (Airport) Hotel.

“The team at the airport have worked so hard. It is devastating. I am looking at people who have broken their backs with us. It is tough work.

“We have to make sure the testing regime is implemented even quicker. People don’t feel safe travelling at the moment. Even before we went in to Level 3 there was a feeling of lockdown.

“The hardest thing about Covid is you see all your hard work and jobs you have created go.

“We will regroup but it is going to be tough. The airport has built itself up once and will do it again.”

Mr Mansworth, who is managing director of the Trigon Group, employed 273 people at their three hotels in Cork in February. Having shut the doors of Cork Airport Hotel, they now have just 100 people on their books.

His sentiments were echoed by airport taxi driver Derry Coughlan, who says Cork has now been shut off from the rest of the world.

“Our business will collapse because Ryanair were one of the main carriers. Everyone flies Ryanair. You have students doing courses, the holiday break crowd, the tourist industry to the likes of Lanzarote, cargo and business travellers.

“It affects all aspects of life. People are very upset. The car hire desks will suffer.

“Ryanair will be a big loss for young people and for older people home for funerals. Ryanair is an essential link to southern Ireland. ”

Brian Bowler, general manager of the Montenotte Hotel in Cork, is particularly concerned about the the loss of corporate clients.

“Traffic at the airport is already 90 per cent down. For the month of October we are running at 20 per cent occupancy. Last year at this time it would have been close to 80 per cent. The corporate market is vital particularly the business traveller staying mid week.”

Studies have indicated that Cork Airport is worth over €900 million annually to the local economy.

Meanwhile, local businesses in Limerick and Clare were also reeling at the loss of the winter base at Shannon Airport.

Fergal Jordan, Owner of Troy Chauffeurs, which runs a taxi service at Shannon Airport, said successive governments had failed to develop and protect connectivity to the region.

“It is not like this hasn’t been brought to the attention of elected representatives.

“Politicians in past governments or the government of today have either passed the buck or have just ignored people on the ground.

“The Government have had many opportunities to develop a traffic light system for travel.

“There is so much doubt there about even travelling next year, because the Government hasn’t been pro active in protecting international travel. Bringing people in to the country in a safe way.”

At Dromoland Castle in Co Clare, director Mark Nolan said there was an element of “inevitability” about the announcement.

He stressed that avation in Ireland is on its knees, and the budget packages announced for the airports were inadequate.

“Supporting airlines has got to be key to the development and future of Shannon Airport. To get any stability at the airport pre testing is critical,” he said.

“I am very conscious of safe travel. But these traffic light restrictions systems are up in a heap. I understand the predicament of the Government. They are focused on a virus that seems to be getting out of hand.

“The bigger picture is and critical to me is the return of transatlantic flights next May. Sixty per cent of my business comes out of North America. We have forgotten about the critical nature of connectivity. We are an island nation and we have to treat the aviation industry with the importance we are treating the hospitality industry.

“But we will recover. We will come out of it.”