Remote selling: How Covid-19 has changed how TV ads are made

Media & Marketing: New filming protocols are challenging but not as costly as feared 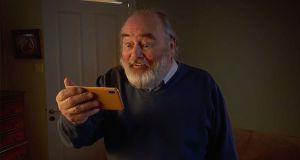 When rumours began swirling around the advertising production sector that new Covid-19 protocols for the film industry could signal the end – for the near future at least – of large-scale, full-crew television ads, producer Max Brady took out her considerable contacts book to put the restrictions to the test.

Last week she assembled a 57-person crew – all highly experienced and all working for free – in Weston aerodrome in Dublin to film a TV ad for a car.

Chris Cottam directed the shoot from his home in Los Angeles, the time difference and physical distance “for additional stress testing”, says Brady. On set, the director of photography was Brendan Galvin (whose latest project is Unhinged, a movie starring Russell Crowe).

The car interior had to be ventilated and cleaned every 15 minutes, and driving off down the runway in a car that had somehow (recession, maybe) transformed into an old banger.

Two-metre social distancing was possible for everyone except the cameraman and grip, who need to be physically close, so they had to be in full PPE, which proved exhausting and cumbersome

Building a bespoke wifi network was key to the technical success of the project. Images were uploaded from the camera to a remote viewing platform where agency people and other observers could watch from their own devices at home, and give feedback via Zoom. There was no latency in image delivery – the bane of all remote workers – and the director communicated with the first assistant director, the director of photography and producer via a private Walkie Talkie circuit. A “witness” camera allowed remote observers to view the set and crew working.

“We had an audio crew there even though the actor doesn’t speak but to take the opportunity to test if an actor could, with direction, mic themselves up,” and that worked. Two-metre social distancing was possible for everyone except the cameraman and grip, who need to be physically close, so they had to be in full PPE, which proved exhausting and cumbersome. Temperatures were taken on set in a health check-in area and a Covid-19 compliance officer was involved throughout to assess risk and apply safety measures, from health pre-clearance of the crew down to a cleaning plan for the toilets.

Participating creative agencies included Boys+Girls, Publicis and Rothco Accenture Interactive, while IAPI, the industry’s representative body, came on board to support the shoot.

Pull the Trigger, Brady’s own production company, is like all others in the sector, a small independent that scales up with freelancers when in production. She points to the crossover in Ireland in terms of crew between film, TV and advertising and says it’s in everyone’s interest to gets to grips with new filming protocols that apply across the industry and get back to work.

There had been fears that coronavirus protocols would add 25 per cent to advertising production budgets – an impossible figure for clients to swallow and introducing the real risk of brands going abroad in search of cheaper options. Crunching the numbers based on the car shoot, but using actual costs, Brady found that the protocols would add varying amounts to the bottom line, depending on crew size and shoot length – but nothing like 25 per cent.

As TV watchers will know, some big-brand new ads have appeared on screen, so production didn’t entirely shut down. These, mostly Covid-themed ads ranged from consumer generated self-taped content, best typified by the kids jumping around in the Vodafone ads, to Bank of Ireland’s campaign launched last week about businesses opening up, which was professionally made after some lockdown restrictions were lifted earlier this month.

The most impressive, though, for how it creatively handled the lockdown, has to be Three Mobile’s Monster campaign where a granddad reassures his worried grandson that there isn’t a monster under the bed.

It was remotely cast and filmed entirely on two iPhone 11s, set up along with a lighting rig in the homes of the two actors – they never met – while the client, and agency executives from Boys+Girls, watched from home and the crew waited outside the front doors.

Tom Merillion directed the shoot from France, where he was visiting family in early March when the lockdown happened. The editing, including the special effect of adding the granddad’s face on the iPad, was done in the editor’s home (using equipment from Windmill Lane) while recording equipment was delivered to the home of the voiceover actor who recorded the script in his wardrobe under a duvet. “We had about 10 scripts that we presented to the client,” says Kris Clarkin, creative direotor of Boys+Girls, who says the technical hurdles he had to get over to make the ad isn’t, in the end, what’s important, “We wanted to make something that [in terms of storytelling and quality] could have been made before Covid, that could be have made six months ago.”