Remdesivir has little effect on Covid-19 mortality, WHO study says 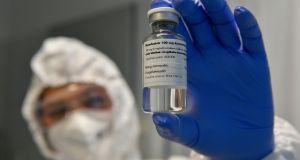 The Covid-19 treatment remdesivir has no substantial effect on a patient’s chances of survival, a clinical trial by the World Health Organisation has found, delivering a significant blow to hopes of identifying existing medicines to treat the disease.

Results from the WHO’s highly anticipated Solidarity trial, which studied the effects of remdesivir and three other potential drug regimens in 11,266 hospitalised patients, found that none of the treatments “substantially affected mortality” or reduced the need to ventilate patients.

“These remdesivir, hydroxychloroquine, lopinavir and interferon regimens appeared to have little effect on in-hospital mortality,” the study found.

The results of the WHO trial also showed that the drugs had little effect on how long patients stayed in hospital. However, WHO researchers said the research was primarily designed to assess impact on in-hospital mortality. The study has not been peer-reviewed.

Remdesivir was one of a series of drugs used to treat US president Donald Trump after he tested positive for Covid-19. It was developed by US drugmaker Gilead Sciences, initially as a potential medicine to treat Ebola.

Remdesivir received partial approval for use in the US and EU after a trial by the US National Institutes of Health in April showed that it cut the time to recover from Covid-19 from 15 days to 11. In July Gilead released further data suggesting the treatment may reduce the likelihood of death, but that finding had not been confirmed in a randomised controlled trial - the gold standard for drug approval.

“We are aware that initial data from the World Health Organisation’s (WHO) Solidarity trial has been made public prior to publication in a peer-reviewed journal,” Gilead said in response to a request for comment. “The emerging data appear inconsistent with more robust evidence from multiple randomised, controlled studies validating the clinical benefit of [REMDESIVIR].”

In a statement accompanying the results of the Solidarity study, the WHO said the trial had “generated conclusive evidence” on the effectiveness of repurposed drugs for the treatment of Covid-19.

“The progress achieved by the Solidarity therapeutics trial shows that large international trials are possible, even during a pandemic, and offer the promise of quickly and reliably answering critical public health questions concerning therapeutics,” it said.

The WHO’s findings mean that the only drug proven to increase Covid-19 survival rates is dexamethasone, a cheap steroid that can be taken orally and is widely available around the world. The WHO has recommended the use of steroids for patients with severe cases of Covid-19.

The Solidarity trial is one of the biggest ongoing studies of Covid-19 treatments. Drugs can be added or removed from the trial at any time. The results for the four drugs in the study seen by the Financial Times cover the period from March to the beginning of October.

The remdesivir arm of the trial involved 2,750 patients. Participants received the treatment for 10 days, with 200mg delivered on the first day and 100mg for the subsequent days.

Andrew Hill, a senior visiting research fellow at the University of Liverpool’s department of pharmacology, said a trial as large as Solidarity “would be expected to show a survival benefit [for the drug, if one existed]”.

This month, the EU signed an agreement with Gilead to supply up to 500,000 treatment courses of the drug for European countries - including the UK - with an option to increase orders.

Gilead has priced remdesivir at $2,340 (€1,997) per five-day course. Some public health experts have said the cost is too high for a drug that has not been proven to reduce the likelihood of death.

Final analysis of the US NIH study of 1,062 patients released last week in The New England Journal of Medicine, showed a decrease in hospital stays of about five days, from 15 to 10, but no significant mortality benefit for remdesivir.