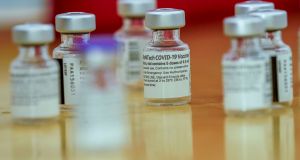 A total of 257 reports of suspected side effects have been notified to the medicines regulator in the first three weeks of Ireland’s Covid-19 vaccine rollout.

The reports, the vast majority of which resolved quickly, amounted to 0.3 per cent of the 77,303 doses administered up to January 18th.

The Health Products Regulatory Authority (HPRA) says the reporting experience to date supports the favourable assessment that the benefits of Covid-19 vaccines outweigh any risks.

“These reports are consistent with the types of events typically observed following vaccination, including those described in the product information for this vaccine. The majority were mild to moderate in nature and had resolved/were resolving at the time of reporting.”

It said it had received a “relatively small number” of reports of allergic-type reactions, though all those affected were reported to have recovered.

None of the reports received to date have been confirmed by the HPRA as involving anaphylaxis.

A small number of reports describing facial paralysis or conditions associated with temporary weakness in the muscles of one side of the face, such as Bell’s palsy, have also been reported.

In its first safety update on the vaccines, the authority stressed that conclusions on the safety of a vaccine could not be drawn on the information provided, given the known limitations in interpreting such data in isolation.

The authority said reports may describe “coincidental” events that would have occurred anyway.

“It would be incorrect to use reporting numbers in isolation to draw conclusions as to the safety of the vaccines,” said HPRA chief executive Dr Lorraine Nolan.

The regulator is expecting more reports for Covid-19 vaccines than for other vaccines given the level of public interest and the fact that it is encouraging the public to report suspected side effects.

The number of suspected side effects for different vaccines cannot be compared as, for example, they may have been administered for different periods of time, to different numbers of people with different underlying conditions.

3:43 Locals rally to help after GP’s surgery destroyed in fire ahead of vaccine arrival

Covid-19: Ireland could be ‘close to normal’ by end of year, says Dr Ronan Glynn