Q&A: What is the latest Government plan to manage coronavirus? 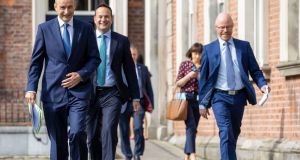 What is this latest Covid-19 response from the Government about?

The Government is moving to a new alert system as part of a medium-term plan to manage living with the virus while keeping schools, hospitals and other essential services open.

How will the new alert system work?

Similar to New Zealand’s four-level alert system, the Government has set five levels with Level One being the least restrictive and Level Five the most severe, amounting to a lockdown similar to the restrictions imposed at the height of the pandemic in March and April. The main difference between that lockdown and Level Five is that schools, creches and universities will remain open under the Government’s new most restrictive level.

Why is the Government changing to this system?

The new plan is a tacit acceptance that the Government and the public are going to have to live with the virus for some time, at least until a vaccine becomes widely available. This plan is set to last between six and nine months. It is intended to make it clearer for people to understand specific public health measures that will apply, depending on the spread of infection at a point in time. Like the colour-coded weather warning, the aim of the plan is to manage public behaviour.

What level is the country being set at?

The current alert status for the entire country is Level Two, largely the same restrictions the country has been living with for several weeks now, although Dublin has additional restrictions. Level Two limits household visits to up to six visitors from up to three other households either in your home or garden. In other settings a maximum of six indoors and 15 outdoors from three other households are admitted.

Are there new measures coming into effect under the new Level Two alert?

But Dublin is getting more severe restrictions than the rest of the country?

Yes, Dublin will remain on Level Two but the Government is cherry-picking some additional restrictions from Level Three, on the advice of the State’s National Public Health Emergency Team (NPHET), because infection rates are higher and increasing at a higher rate in Dublin.

What are these additional restrictions?

Household visits will be more limited with no more than six visitors permitted from one other household. Wet pubs will not be allowed to open on September 21st as planned. People are encouraged to limit travel outside the region and to meet only one other household when outside. Minister for Health Stephen Donnelly said residents in Dublin “absolutely can” travel outside the county. Taoiseach Micheál Martin later clarified that the advice from Nphet was that people were being encouraged not to travel outside Dublin but there was no regulation attached to it. “I am encouraging people not to travel, if at all possible,” Mr Martin told RTÉ. The Department of Health directed queries on the issue to the Level Two details from the Covid-19 plan which says that there are “no restrictions” on domestic travel.

This is confusing - why not move to Level Three fully for Dublin?

It certainly makes a system designed to make public restrictions easier to understand more complicated, and this has drawn criticism from Sinn Féin, Labour and other opposition parties that the announcement of the plan was confusing. Dublin could be considered as being somewhere between Level Two and Level Three or “Level Two and a bit”. The view within Government and among public health officials was that escalating Dublin fully to Level Three would involve a move to restrictions that are not required and that would be disproportionate.

What are the Level Three measures that would be so bad?

Businesses such as pubs, museums and other indoor cultural venues such as theatres, cinemas and arts venues must close. Restaurants can only remain open for takeaway or outdoor dining. People will be required to remain in their county or region. Attendance at weddings and funerals drops from 50 to 25 people. Only professional or elite sporting matches or events can take place and must be behind closed doors. There would be an additional severe measure for some older people: visiting at nursing homes would be suspended.

How bad is the infection rate in Dublin?

The number of Covid-19 cases is considerably worse than elsewhere in the country. The 14-day incidence rate - one of the criteria that sets an alert level - stood at 95 for every 100,000 people in Dublin over the 14 days to Sunday. This is almost twice the national average of 50 cases per 100,000. Parts of Dublin have higher rates: Dublin North West has 131.5 cases per 100,000.

What other criteria are followed?

There is a long list but they include the number and location of cases and clusters, incidence rates over 14 days, the capacity to manage outbreaks as well as testing and contact tracing along with the capacity of the hospital system, the number of deaths and the international situation.

Will NPHET decide on the alert levels?

No. The Government will decide. A new group, chaired by Government secretary general Martin Fraser, will assess NPHET’s advice first to consider the practicality and effect of measures beyond public health, considering the economic and social impact before Government decides. This is designed to help Government consider and take time to communicate measures better.

How severe can restrictions get?

If things improve and the country is moved back to Level One, will things return to normal?

No. Even on Level One, there are restrictions, including visits being limited to 10 people from up to three households and weddings and indoor gatherings limited to 100 people.

What about international travel?

The Government is planning to abandon its “green list” of counties where people are not required to quarantine upon return. Instead, it is adopting the EU’s planned traffic light system. This is based on “green countries” which have less than 25 cases per 100,000 people over 14 days and the positivity rate on testing is less than 3 per cent. Countries will be colour-coded “orange” if they have less than 50 cases per 100,000. Green and orange countries will be open to Irish travellers, which, right now, would still leave counties such as Spain, France and Croatia still closed. The new EU system will not come into effect until next month so in the meantime the Government is going to update its existing green list.