Q&A: What can we expect in today’s revised Living with Covid plan?

Fundamentals are unlikely to change, but there should be some clarity on schools and childcare 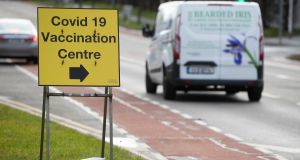 A sign for a Vaccination centre at DCU on Collins Avenue in Dublin. Photograph: Brian Lawless/PA Wire

Another week, and another high-stakes set of Covid decisions will go to the Cabinet.

This time, the Government’s Living with Covid plan – the five-level scheme first published during summer – is getting a fresh coat of paint. The powerful cabinet subcommittee on Covid met last night to sign off on the new plan, which goes to cabinet tomorrow. So what should we expect?

Will there be a wholesale change in the plan?

Those involved say it’s basically a “development” of the plan rather than a “radical departure”, and there won’t be a repeat of the reopening strategy of last summer, when a medium-term plan was published, with dates associated with different actions, and then accelerated.

There may be some additions to the overall public health advice, such as around ventilation, but the fundamentals are unlikely to change.

There is likely to be an update on vaccinations, and there may be some more detail on how the Government plans to make decisions – the different variables and metrics that will be watched, from hospitalisations to vaccinations.

But it is unlikely that there will be “trigger points” like a series of activities that all of a sudden become possible when a certain percentage of the population is vaccinated, or numbers in hospital fall below a certain point.

Burned by previous experience, and still struggling to understand the exact impact of the B117 variant (first identified in the UK) on the spread of the disease, the Government is only willing to put firm dates on things that are happening in the near-term. This has led to significant communications difficulties, not least last week, when differences of tone, emphasis and content in ministerial pronouncements led to widespread frustration and criticism. This is acknowledged by Government insiders: “We’re falling between two stools – we’re saying there’s too many uncertainties, but then the Taoiseach kind of spells it out,” says one source, referring to Micheál Martin’s allusion to nine weeks more severe restrictions last week. “The problem is all these communications are being digested in the real world, and it’s freaking people out.”

So what will we learn?

The very near term is the most clear: at primary level junior and senior infants as well as first and second class look set to return on March 1st, alongside Leaving Cert students at second level. The way forward for this has been cleared by advice from the National Public Health Emergency Team (Nphet), and there is likely to be more detail on a staggered return to education during March. The next date in the school reopening plan is March 15th, when other primary school pupils and fifth years are expected to return. Under this plan, though, it is yet to be approved by Ministers, the remaining secondary school students will not return until after the Easter holidays, on April 12th.

There is also likely to be some clarity on childcare, with some class of a resumption of the State’s Early Childhood Care and Education (ECCE) scheme on the cards on March 8th, and a reopening of services for the children of non-essential workers.

This will have to be weighed against keeping mobility down, and the fact that some childcare services are offering daycare to school-age children at the moment. This creates a difficult balancing act for those operators, who may be using spaces usually catering for ECCE children to care for school-age children not in their normal classes.

It’s understood some ministers made a last minute push to have domestic private one-off housing completions permitted, but it appears that was unsuccessful. Despite some heavily trailed hints in recent weeks, construction is unlikely to widely reopen. Since this lockdown was instituted in January, Government sources have intimated that reopening will be a case of “softly, softly, catchee monkey”. This means that as services resume, space and time will be given to disaggregate the impact of individual steps on the performance of the disease. So instead of signalling when businesses can expect to reopen, the Government’s economic supports for workers and companies will be extended into summer. Privately, and bluntly, one Government source says: “The only thing that’s going to happen between [now and] the end of April and May is the schools”.

Rules on meeting up outdoors and the 5km exercise limit will be retained. In a fairly classic kick for touch, the Government will signal a review of measures in early April. In the distance, relaxations such as the reopening of non-essential retail and the expansion of the 5km exercise limit. But not yet. One thing to watch as a potential curveball would be signalling some change on meeting up outdoors, with grudging acceptance in Government that this is taking place already. A concession on this front could be seen as a very small carrot to balance out a rather hefty stick. However, that will also have to be balanced against the stubborn fact that when people meet up, the virus will transmit.

There will likely be updates on the big moving parts currently at the centre of pandemic policy – travel, mandatory hotel quarantine and vaccines. The vaccine priority order will be changed to allow earlier access for people with certain chronic health conditions. Elsewhere, much will remain as is, with public health advice staying in place, people urged to keep their distance, restrict their movements, and work from home. Those involved in drafting the plan say there will be an emphasis on resourcing public health teams in an effort to control outbreaks, and that progress will be very slow. The idea is to take individual small steps, measure, and then hopefully proceed, sources say - rather than wholesale shifts between levels which unlock a whole range of activities all at once.