Q&A: Everything you need to know about travelling to and from Ireland

Can I go on holiday? Can people come home for Christmas? Will I be able to go on summer holidays? 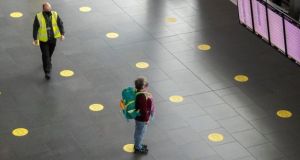 There have been more developments when it comes to international travel have there?

There have indeed. And it is good news for people who might want to travel either to or from Ireland over the Christmas period. Or at least it is considerably better news than anything we have heard in recent months.

It looks like international travel will get easier to countries in the EU as well as the UK and possible even the US in the weeks ahead after the Government reached a decision to allow Covid-19 testing for passengers passing through Dublin Airport.

When it that going to happen?

It is likely to be implemented within days. The Cabinet has also agreed that arrivals from EU “red” countries from midnight on November 29th will not have to restrict their movements for the full 14 days if they produce a negative PCR test at least five days after their arrival.

Where can I get a PCR? Does the HSE do them? I am told they are free?

The HSE does do them and they are free but – and this is very, very important – they are not free or available to you in these circumstances. Covid testing is only free for people who fear they may have the illness but not for people who are travelling to and from other countries or want to shorten their period of movemet restriction.

So, where will I get a test?

If you want to get a test you will have to pay for it. There are a great many companies and medical centres now offering such testing and you can expect to pay between €170 and €190 for the test, although if you need one turned around faster than between 48 and 72 hours the prices can climb.

What happens once I have taken the test?

Procedures will vary but, typically, if you do a PCR test you can expect to get a clearance certificate to allow you move about freely even if you have returned from a red country.

Red countries? Can you remind me again what they are?

As of last weekend, a long talked about traffic light travel system came into force across Europe. That means that, at the very least, people should have more certainty as to where they can travel in the weeks ahead without having to restrict their movements upon arrival either in the destination or upon their return home.

Can you tell me more?

Well, last month EU countries – and the UK – agreed to adopt a co-ordinated approach to travel restrictions. Under the new system, the 14-day rate of Covid-19 infection per 100,000 of the population in regions across the EU and the UK will be updated each week based on figures provided by the European Centre for Disease Prevention and Control (ECDC).

Countries or regions will be coloured green if the 14-day incidence rates of Covid-19 is below 25 people per 100,000 and the positivity rate for the disease is below 4 per cent.

Countries will be red if the 14-day incidence rate is above 150 per 100,000, and where the test positivity rate is higher than 4 per cent.

Are there any other colours?

There is one, as it happens. It’s grey. A country or region will be coloured grey if there is insufficient data on testing and incidence rates can be found.

Why do you keep saying “countries and regions”, what not just say countries?

Because under the new rules, there will be circumstances where regions of one country may have different colours. For example, it may be that the Canary Isands are Green but Catalonia is Red while the Costa del Sol is orange. The places are all part of Spain but many thousands of miles apart.

Well, if you arrive or depart from red regions you will be expected to restrict your movement for 14 days, as has been the case for months now if you do not have the test as mentioned above. Travellers from orange regions will be allowed come into Ireland without restricting their movements as long as they have proof of a negative PCR test (Polymerise Chain Reaction test – considered the gold standard in testing for Covid) that was done no longer than three days before their arrival. Travellers from green regions will not need to restrict their movements when they arrive in another country.

Are there any green countries or regions in the EU at present.

There is only one. And – by something of a mad coincidence – it is Greenland.

What happens if I travel to a country when it is green and then want to come home when it has gone red?

That can certainly happen. And if it does then you will have no option but to restrict your movements for 14 days upon your return or for five days if you pay for the test.

And what happens if I book a trip to a country when it is green but it has turned red or even orange by my departure date? Should I go? Will I get my money back from the airline, hotel or tour operator if I don’t?

Refunds seem unlikely. As has been the case almost since the start of the crisis, if a plane takes off and you have a ticket booked but do not board, then you have no right to get your money back or even to get a voucher in lieu of the money. You ware regarded as a no-show and the best you can hope for is a return of the taxes and charges.

It is most likely to be the same story when it comes to other elements of a trip. The plan as it stands is for information on new measures or a change in status to be published 24 hours before they come into effect. That will not give you a whole lot of time to change your plans. As to whether or not you should go, that will very much depend on your own circumstances and reason for travelling.

So what colour is Ireland right now?

Ireland is red. The most recent incidence rate for the Republic was just over 154.5 per 100,000 of population.

Are there any new measures being put in place?

Yes. Passengers using Dublin Airport will be able to be tested pre-flight for coronavirus after the Cabinet approved a planning exemption for a privately run testing facility at the airport. The airport testing will allow Irish travellers to go to regions classified as “orange” under the EU traffic-light system for international travel where, if they have a negative test, they will not be required to restrict their movements for 14 days.

And when will the testing be in place?

A spokesman for State airport operator DAA said it would be possible to have a testing facility up and running at Dublin Airport in a matter of days.

What about other airports?

According to State airport operator DAA, two drive-in Covid-19 test centres will open at Cork and Shannon airports on Thursday.

Any movement on the US?

The Government said it would keep travel from the US under review but the same “red” country arrangements would apply to travellers from there.

So I will be able to come home to Ireland this Christmas?

Maybe. You can certainly come from even a red country if your are preparted to restrict your movements when you do. It is important to stress that the country is not closed to international travel and if someone chooses to fly to Ireland or indeed to take a ferry, then they will be allowed in but they will be expected to restrict their movements.

Yes, there is no law in place forcing people to restrcit their movements and the authorities are relying on people’s civic mindedness to do that.

What happens if I plan to come home, from the UK, say, for Christmas but only want to spend five days in Ireland? How can I restrict my movements for 14 days then?

Well, under the rules, when you arrive into Ireland from another country, you must fill in a Covid-19 Passenger Locator Form. The information on the form is used to contact you to check your location, or to contact you if there is a confirmed or suspected case of Covid-19 on your flight or ferry. If any of the information on the form changes within the next 14 days, you must email passengerlocatorform@plf.ie with updated information.

Are there any exemptions?

Yes, under the EU traffic light system essential workers, including healthcare workers and transport workers along with those travelling for “imperative business or family reasons” and medical reasons, are exempt from restricting their movements. Students who travel abroad on a daily basis, diplomats, NGO staff, passengers in transit, seafarers and journalists, when performing their duties, are also exempt.

And are people travelling in large numbers now?

Absolutely not. In fact the numbers flying to and from Dublin Airport last month were 91 per cent down on the same period last year.

What is the Government saying about travel generally?

Well, the Department of Foreign Affairs is advising people to exercise a high degree of caution when travelling to traffic-lighted (traffic-lit?) countries. It is cautioning against travel to any country not covered by the new system.

What are the medics saying?

They are not saying pack your bags, that’s for sure. The Chief Medical Officer Tony Holohan has said international travel remains unsafe. He has said that even with tests carried out five days after arriving Ireland as many as 15 per cent of imported cases can be missed.

What about the rest of the world?

There’s no real movement on that score yet, but the EU is hopeful that once the traffic light system is in place within its borders it will be able to roll out a harmonised approach with other regions, including the US.

And will I be able to go on my summer holidays next year?

We hope so. We really, really hope so.