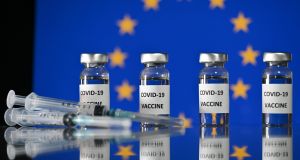 The imminent arrival of vaccines holds out the prospect that the pandemic may be brought fully under control in the developed world by the end of next year. Photograph: Justin Tallis/AFP/Getty Images

While there are differences in how severely EU economies have been affected by the pandemic, the pattern of damage and the policy response has been very similar. The result of the shutdown in the second quarter of this year was a severe drop in output, followed by substantial recovery in the third quarter.

The current resurgence of the virus will, in turn, see a further downturn in the last quarter of the year.

In the first wave of the pandemic, some economies, such as Germany and Poland, fared better in terms of case numbers. However, the economic pain was felt whether or not there was a serious lockdown.

In this second wave, even the countries that saw relatively low case numbers the first time round are suffering a serious rise today.

The imminent arrival of vaccines holds out the prospect that the pandemic may be brought fully under control in the developed world by the end of next year. However, the end of next year is a long way away and we could see a further cycle of shutdowns in the spring.

Although de facto the fiscal rules have been relaxed, there was no formal mechanism to co-ordinate the fiscal policy response across the EU. Nonetheless all member states have adopted a similar approach, borrowing heavily to provide insulation for their economies from what is seen to be a temporary massive disruption. This approach has been greatly facilitated by the monetary policy response of the ECB.

A major injection of EU funds is also planned, though this has not yet cleared all hurdles.

Across the EU, governments are expected by the EU Commission to borrow 15 per cent of GDP over 2020-21 to support their economies. The highest level of borrowing is expected to occur in Belgium, France, Italy, Spain and the UK.

Borrowing in Scandinavia and Eastern EU members is expected to be somewhat smaller, partly reflecting a lower incidence of the disease in the first wave.

While governments have been undertaking massive borrowing, the impact of temporary lockdowns and the natural response of households to the crisis has seen a dramatic fall in consumption. This has happened despite the action of governments who, through their borrowing, have ensured that aggregate real household income has remained broadly unaffected by the lay-offs in the labour market.

While income is broadly unchanged, with much lower spending there has seen a build-up of household savings, something that is expected to continue next year until the roll-out of a vaccine allows a return to normal behaviour.

The EU Commission has forecast that, by the end of next year, exceptional household savings within the euro zone will amount to over 8 per cent of GDP. How households use those large savings once the crisis is over will play an important role in determining the nature of the recovery.

The EU forecast assumes that households gradually run down these exceptional savings over a period of years. However, I believe that there may be a more immediate response.

Households who have not taken a holiday for two years are likely to take one, possibly an extended one, in 2022. Also, many families have been kept apart by their inability to travel and they will seek to be reunited as soon as a vaccine permits.

Pubs and restaurants are also likely to see exceptional demand. If this happens, there could be a consumer boom in 2022, leading to a more rapid recovery for some sectors than the EU Commission anticipates.

The worst affected economies in the EU have tended to be those most dependent on tourism. Northern European tourists who would normally seek the sun in the summer, have been forced to remain at home.

If 2022 were to see a holiday boom, as northern European households spend some of their savings on sun holidays, it could help speed the economic recovery in countries such as Croatia, Greece, Italy and Spain. These economies will also benefit most from the planned EU recovery package.

Across the EU, the extent of the likely increase in borrowing by governments in 2020 and 2021 is largely matched by the increase in savings of households. When households come to spend those savings, be it in 2022 or spread out over subsequent years, between 30 and 40 per cent of that expenditure will end up in increased tax revenue for governments and reduced expenditure on unemployment payments.

Thus, the long-term impact on EU governments’ debt of the expansionary fiscal policy currently being pursued could be significantly less than is being forecasted by the EU Commission.