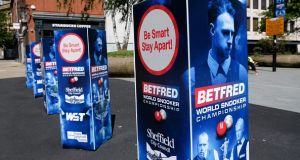 Around 300 fans had been allowed into the first morning of the World Snooker championships on Friday. Photograph: Getty Images

The sports industry has been dealt another blow after the British government withdrew permission for some fans to watch events inside venues with immediate effect because of fears of rising Covid-19 infection rates.

Around 300 fans had been allowed into the first morning of the World Snooker championships, which started in Sheffield on Friday, while Glorious Goodwood was expecting 5,000 paying racegoers on Saturday. The Oval and Edgbaston were also due to stage Bob Willis Trophy matches in front of 2,500 fans this weekend.

The new policy was announced by the British prime minister Boris Johnson, who confirmed that no crowds would be permitted inside sporting venues for at least the next fortnight. “We must squeeze the brake pedal,” said Johnson, pointing to figures showing that the prevalence of the virus was likely to be rising in England for the first time since May.

The chief medical officer for England, Chris Whitty, went further in warning: “We have reached the limits of opening up in society. The idea we can open up everything and keep the virus under control is clearly wrong.”

Reacting to the government’s announcement, an ECB spokesperson confirmed the two Bob Willis Trophy matches would still go ahead this weekend. “We understand this is disappointing for supporters who have waited a long time to see their clubs in action and were looking forward to attending pilot events at the Kia Oval and Edgbaston this weekend,” he said.

“However, we understand the reasons the government has made this decision, and remain ready to work with them to ensure supporters can safely return to stadiums when government advice allows. We are pleased the Bob Willis Trophy will still begin this weekend behind closed doors, and fans will be able to watch their teams in action through the online streams being provided.”

Goodwood racecourse also confirmed in a tweet that Saturday’s races would continue behind closed doors. “The government has informed racing’s leaders in the past hour that it has withdrawn permission for a pilot event involving customers, to proceed at Goodwood tomorrow,” it said. “The racing on Saturday will continue behind closed doors as it has on the previous four days of the meeting.”

World Snooker confirmed that fans would still be able to attend Friday afternoon and evening sessions of the world championships at the Crucible, however no spectators would be allowed in from tomorrow. - Guardian