Pilita Clark: Workers shirking are more than just a nuisance 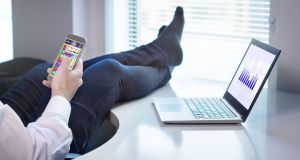 Never have so many been so worried about losing their jobs while feeling so reluctant to do them. This thought shot to mind last week as the new year was upended by worrying new strains of Covid, a fresh round of lockdowns and more job cuts.

Close behind came another idea: there has never been a better time to study the ways of the cunning minimalist.

This is a species of worker, common to every office, who instinctively knows how to avoid the tiresome, invisible work that makes life easier for colleagues but that gains little attention or credit.

Instead, they focus on high-profile stuff. The boss’s pet project. Work that gets noticed, inside and preferably outside too, because doing it makes one more marketable and thus invincible.

I wish I could say I came up with the cunning minimalism term that so aptly describes this unvirtuous circle of craftiness, but I did not. I heard it the other day from a despairing friend who was trying to work out how she and her husband could juggle another spate of home-schooling and childcare on top of their demanding jobs.

“Both of us have always believed that, if you work hard, you’ll get ahead, so that’s what we’ve always done,” she said. “But it’s killing us now so I’ve decided we have to be cunning minimalists and be more strategic about what we do or don’t do to get by.”

She was joking, mostly, but not entirely. The trouble was that she, like me, was so averse to the idea of shirking that she had never worked out how to be a successful minimalist, cunning or otherwise, despite years of close observation.

He was grumpy and slightly intimidating, so managers disliked asking him to do something if a nicer, more agreeable person could do it instead

The first time I noticed a master in action I was working in an Australian newsroom that, like a lot of other places, had a rota for weekend shifts. Everyone was on it except for one middle-aged reporter. His absence meant that everyone else had to do a bit more work.

“How come he doesn’t have to work on Sundays?” I asked a manager one day. The manager’s face clouded as he explained the man had refused to do weekend work and no one, including the editor, was inclined to make him.

This did the man no harm at all. He proceeded to glide from job to golden job in a career that glistened with awards, acclaim and book deals.

How did he do it? The same way I have watched countless others do it in every place I’ve worked at since. He was grumpy and slightly intimidating, so managers disliked asking him to do something if a nicer, more agreeable person could do it instead. He was also an expert at saying no, a skill the nicer people often lacked, and adept at staying onside with the boss and the boss’s most powerful lieutenants.

Crucially, he was rarely in the office, which meant he avoided being asked to do things in the first place.

Covid-19 has upset this strategy in two distinct ways. First, hiding outside the office can be less of a foolproof ploy if everyone is working from home and managers feel the need to keep a closer eye on who is doing what.

Before the pandemic took hold, chronic work stress had become such a widespread problem that the World Health Organisation officially listed burnout as an occupational phenomenon in 2019.

In other words, the cunning minimalist has become an increasingly risky management problem. The resentment they breed was bad enough in good times, but at a time when so many workers face so much hardship and stress, it is intolerable.

More than ever, companies need staff to be as generous and collegial as possible. Letting the minimalists roam free is not just unfair and unreasonable, it also encourages the rest of us to think about joining their ranks to survive.