Peter Cluskey: What would Adrienne have made of coronavirus? 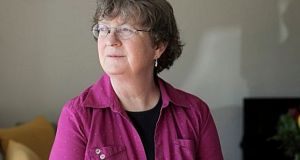 ‘Adrienne Cullen died in the Netherlands on New Year’s Eve 2018, one of far too many victims of medical negligence.’

There’s an exchange in Skyfall, one of the Bond movies, where 007 is asked, “How much do you know about fear, Mr Bond?” And the response comes back simply, “All there is.”

There’s a haunting starkness to that answer. It just hangs there. Because that’s what fear does, it strips away excess, niceties, excuses and says, “well, here we are, let’s get down to business”.

Every time I see that movie on television, I think of my wife, Adrienne, who died at the age of 58 having learned all there is about fear – but instead of succumbing to its dark side, re-engineered it to achieve what should have been unachievable.

Having lived with the fear of death day and night for six years, until the moment finally arrived at a time of her choosing in the form of euthanasia, she may have something to tell us about how to handle fear of coronavirus – without letting it destroy our lives.

Those of you who read these pages regularly may know that Adrienne Cullen – born in Sligo, raised in Limerick, and educated at UCC – died in the Netherlands on New Year’s Eve 2018, one of far too many victims of medical negligence.

Her ultra-modern Dutch university hospital, UMC Utrecht, “lost” test results showing she had cancer and “found” them two years later when it was too late. A subsequent investigation showed that, incredibly, it also misread a second test.

A medical consultant, agreed by both sides in the legal action that followed, ruled that if the test results had not been lost, there was a 95 per cent likelihood she would have been “cured” rather than having to face terminal cervical cancer.

So, that’s what her hospital did. But what did Adrienne do?

Well, she tried desperately not to die – by having chemo and radiotherapy twice and three major operations over six years – although she knew the overwhelming odds were that she was “brown bread”, as she blithely put it.

The question then became what sort of person did she want to be when she died?

It would be Pollyannaish to say anything other than that you can take your pick from a long list of callous, dismissive, self-serving, self-satisfied, lazy and incompetent human beings she met while seeking help during her last painful years.

Luckily, that wasn’t the whole story.

It’s a matter of record that she fought the good fight: the highest compensation ever in the Netherlands, the first written apology from the chief executive of a Dutch hospital to a patient it harmed, an annual lecture in her honour, new transparency protocols in all major hospitals in cases of harm, and most recently plans by prime minister Mark Rutte’s government to ban gagging clauses in medical cases – something for which Adrienne was a tireless campaigner.

But having decided she wasn’t a bucket list kinda gal, one particular thing that she did was totally counterintuitive: rather than accept that they were now her adversaries, she sought allies among her doctors – and found that, to her surprise, some were willing to stand up and be counted.

As a result, when she delivered the first Adrienne Cullen lecture in April 2018 at UMC Utrecht before an audience that included its chief executive, the boss of the Dutch healthcare inspectorate and Irish Ambassador Kevin Kelly, she was not on the podium alone. Two of her senior doctors were up there with her.

All three of them told it like it was: unacceptable and downright sordid at times, particularly in relation to the gagging clause – but a unique moment of lasting change as well.

What would Adrienne have made of coronavirus? She’d have been wary of it, of course, having had her immune system compromised royally by chemotherapy.

Beyond that, she’d have thought of it as another opportunity to see each other differently and do things differently, as collaborators rather than as competitors – as adults, primarily. To that extent she was always a woman of the future.