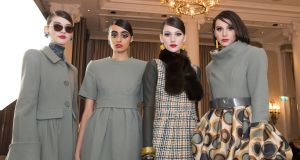 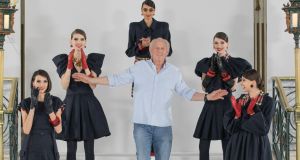 Paul Costelloe’s clothing line for Dunnes Stores has been badly hit by the pandemic, the designer has conceded.

“We didn’t anticipate the lockdown being so long and the whole spring collection is sitting in warehouses, in China or in Europe,” he said as he marked his 35th year at London Fashion Week on Friday with a filmed presentation of his winter 2021 collection that opened the three-day, all digital event with an online catwalk.

“To get something posted to Ireland can now take over a week. I am small, so I can’t imagine how other, bigger companies are coping,” he said.

His homeware for Dunnes, considered essential, has not suffered as much though he admits that designing on zoom has its own difficulties and challenges.

“I am a touchy feely designer and need to feel the fabrics and the ceramics. Colours aren’t always accurate online: these things are important, though I am happy to be working on linen cushions for the winter season.”

Speaking about the virtual London Fashion Show, he said: “For me, this is really just to keep my name visible and for my licences. It was an all-day shoot with five models and 25 outfits and one-third of the cost of a live show,” he explained.

Though not ready to wear for sale, orders for any of the items “that come with a guarantee will be considered” he said, adding that it was one of his most commercial collections to date and that the reaction generated by it “was amazing”.

“ People want some optimism and something to uplift their spirits and that’s what a simple catwalk show can do,” he said.

A reflection of his early days as a young designer in Paris in the late 1960s, the collection had a strong emphasis on tailoring, sharp suiting and softly constructed evening wear.

Fashion designers in the UK say that their businesses are at risk because of the new Brexit trade deal, arguing that the industry is worth £35 billion to the economy, more than the car, film, music and fishing industries combined.

Mr Costelloe employs three pattern cutters, one in Greece, one in London and one in Poland “but this is such a dead place these days and it will be difficult for immigrants to come back”.

“But things can be done in spite of the pandemic. You have to be brave and stubborn and I am both.”