‘No income is coming in. We have to close everything. It is difficult’ 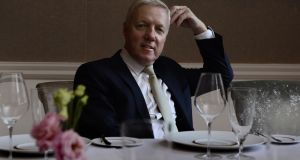 Patrick Guilbaud: ‘This is worse than a war because during a war, you don’t close businesses and restaurants. You keep them going. You don’t stop a way of living.’ Photograph: Cyril Byrne/The Irish Times

Dublin restaurateur Patrick Guilbaud has said the business environment for restaurants during Covid-19 is worse than what it would be like during war-time.

“People say to me ‘Patrick, this is a war’ but this is worse than a war because during a war, you don’t close businesses and restaurants. You keep them going. You don’t stop a way of living,” he said.

“This is worse. No income is coming in. Now, we have to close everything. You can’t go and meet your loved ones. It is difficult. Nothing is worse than war but this is tough.”

His restaurant Guilbaud’s, which has two Michelin stars and is located in Dublin’s five star Merrion Hotel, is currently going through its second shut down this year due to Covid-19.

The restaurant, operating since 1981, has weathered five recessions before the first Covid shutdown in March.

“Going from 100 per cent to zero per cent is very tough. From being very busy to doing absolutely nothing is tough,” he said.

Mr Guilbaud was commenting on new accounts filed by the restaurant’s Becklock Ltd, which show post-tax profits increased by 66 per cent to €873,643 for the 12 months to the end of August last year.

Mr Guilbaud said last year was “as good as it gets” from a business point of view, but “this year is going to be a disaster. That is life.”

The business was performing well after reopening this summer after lockdown, and had reduced the number of seats in the restaurant from 85 to 50 to comply with health regulations.

“We did everything we had to do by the book,” he said. “We were doing well and the restaurant was busy and staff were getting money back into their pockets.”

The collapse in tourism robbed the restaurant of its vibrant tourist trade this year, but “we had very strong support from the Irish people when we re-opened,” he said. “It was fantastic.”

“The reserves we put aside every year make sure that we have enough to survive - they are starting to get thin and we have to be careful,” Mr Guilbaud said.

The business has availed of the Government’s Covid wage subsidy scheme for staff.

“We are hoping to re-open as soon as we can. All my team are ready and willing and eager to go back.

“We have to follow the regulations and we want to be part of the solution and not part of the problem. I know the Government is trying to do the best it can and I know it is not easy for anyone.”

Mr Guilbaud said after a successful 2019, bookings were very strong before the first close down in March.

“We had to cancel everything and start again. I’m sure our customers will come back,” he said.