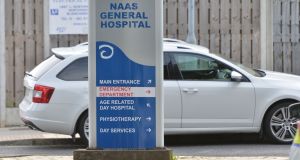 Two wards at a hospital, including a psychiatric unit, in Co Kildare are dealing with an outbreak of Covid-19.

Health officials say that an outbreak control team is tackling the cases on two wards in Naas General Hospital – including the inpatient acute Psychiatric Lakeview Unit, based on the grounds of the hospital.

A spokeswoman for the HSE said that the outbreaks in the acute hospital are separate to the outbreak on the psychiatric ward.

Staff and patients have been tested for Covid-19 as part of the contact tracing system.

Any staff identified as close contacts of Covid-19 cases have been asked to isolate.

An outbreak in a healthcare setting is called when there is a minimum of two positive contacts.

A spokeswoman for the HSE said: “Plans have been developed to support continuity of services and guide senior management to identify the level of impact on service and staff.

“The protection of public health is of the utmost importance and every effort is taken to reduce the risk of spread of Covid-19.

“The HSE cannot comment on individual cases or outbreaks as to do so would breach our duty of confidentiality to the individuals and organisations concerned.

A further four Covid-19 linked deaths and 859 new cases of the virus have been reported in Ireland on Saturday, the National Public Health Emergency Team (Nphet) confirmed.

The death toll now stands at 1,882, while the total number of infections since the pandemic began is 56,108.

Meanwhile, people who organise house parties in breach of Covid-19 regulations could face fines of up to €2,500 after new legislation came into force this weekend.

The legislation, passed by the Dáil on Friday evening, gives powers to gardaí to issue fines to people in breach of the lockdown regulations.

The public face fines of up to 500 euro for breaching the 5km travel limit introduced as part of lockdown measures.

Those who host house parties or gatherings could be fined up to 1,000 euro at the first instance.

Second and third offenders can face imprisonment and fines of up to 2,500 euro.

The legislation underpinning the use of fines for breaches of restrictions was passed in the Dail and the Seanad on Friday.

The law in relation to house parties comes into effect this weekend, but the fixed penalty notices will be introduced in the coming week.

There will be more than 2,500 uniformed gardai on duty each day during the six-week lockdown introduced on Thursday.

The fines were introduced in a bid to curb the spread of Covid-19 among households.

Statistics released by the Central Statistics Office Ireland (CSO) on Friday show that outbreaks in private houses account for 54 per cent of cases linked to an outbreak in the last four weeks.

The country’s incident rate exceeded 300 per 100,000 population for the first time since the onset of the pandemic.

Meanwhile, campaigners staged a protest against the introduction of level five public health restrictions aimed at combating the spread of Covid-19.

They assembled outside the GPO on O’Connell Street, where a number of speakers addressed a crowd of around 100 people.

Some of the protesters carried placards and signs opposing the lockdown, while others waved Irish flags.

It comes two days after 11 people were arrested for alleged public order offences as gardai intervened in Thursday’s anti-lockdown protests in Dublin.

On Friday, Garda Commissioner Drew Harris expressed reservations about the use of fines for enforcing Covid-19 restrictions.

Mr Harris refused to say he supports the penalties.

He said the enforcement measures would only be used as a “last resort”.

Asked if he supported the measures, he replied: “The good thing is the piece of legislation backs this up. I’m a public servant, a good and faithful servant at that, and I’ll do as I’m told.

“We have fines, but they are set in an enforcement sphere. We have to discern then what our policy and practice is with respect of that enforcement.

“But we have already set that out. Enforcement is our last resort. So the use of the fixed charge penalty notice, or a report to the DPP, is a last resort for us in all cases.” – PA