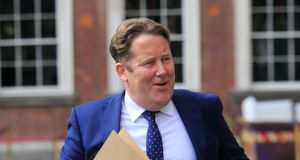 Minister for Housing Darragh O’Brien: pledged laws on cuckoo funds, rent relief and vacant sites. None made it into the programme for government.

If you want to know who holds the real power in Ireland, don’t look at what governments do, but what they don’t do. The world knows that tech firms harvest data, have misused it, then lied about it when caught. Facebook is among the most egregious offenders and has the five billion dollar fine to prove it. It seems remarkable then that you have not heard – nor are you ever likely to hear – a seriously critical utterance about the firm which employs almost 5,000 people here from anyone in Government or a State agency.

Ireland has even provided a sort of free legal aid service when tech companies’ remarkably low tax rate is challenged by the EU. Germany’s regulator has repeatedly said our Data Protection Commissioner is under-resourced and part of its operations to police multibillion-dollar global firms remain above a Spar shop in Portarlington.

There have been tougher words for the insurance industry but zero action. Insurers are easy villains for the ordinary punter to grasp. Some refused to pay out for business interruption in lockdown despite small firms paying for policies to explicitly cover pandemics. They grossly exaggerate the prevalence of fraud to justify increasing premiums. Dual pricing, where they punish loyal customers who don’t shop around by charging them more to renew, is rampant. Minister for Finance Paschal Donohoe gently reprimanded firms for not paying out on pandemic policies but ultimately has done nothing.

Last year when the media presented evidence of dual-pricing rip-offs, the government ordered a review. It took over a year and confirmed last week what we already knew, that insurance companies are ripping customers off with dual pricing. They were doing it yesterday, they’re doing it today and they’ll do it tomorrow. The Minister responsible, Sean Fleming, pledged action . . . in 2021. Why not just ban it now? He felt another stage of review is needed. The insurance industry wins a few more months (or maybe years) to keep making money.

It seems remarkable that not even a pandemic can force the Government to cast a critical eye on the operations of meat processors. In 2019, farmers protested when firms slashed the price they pay them for beef even while company profits soared. The government refused to criticise them, focusing instead on the protesting farmers who were admittedly engaged in indefensible tactics despite their just concerns.

Insurance companies are ripping customers off with dual pricing. Yesterday, today and they’ll do it tomorrow

In spring, when Covid-19 outbreaks erupted in meat plants, it was the British media that highlighted the atrocious conditions of workers. The low temperatures, low wages and fear among the mainly foreign workers of losing wages because of no sick pay. Unions said 600 workers had Covid-19 at one point. Some test results were sent directly to their employer by the Health Service Executive, clearly setting out just how low down the scale the State views meat plant employees, often drawn from the already miserable life of direct provision.

The Health and Safety Authority pledged to monitor the factories but it actually gave employers a heads-up before making inspections to check standards. The surge in cases at meat factories contributed to the lockdown of three midlands counties in August. The Tánaiste was asked to comment on the meat plant outbreak. Leo Varadkar replied, “I think it’s wrong to attribute blame”, despite weeks of the Government blaming young people having house parties for spikes in Covid-19.

Similarly, the investment funds that effectively control Dublin’s rental market achieved such influence through government inaction. A Daft.ie report recently found the number of homes available for rent has increased by 40 per cent but, mysteriously, rents are not falling. The market does not decide rent prices, corporate landlords do. Many emergency provisions from the pandemic remain in force because, as we’re repeatedly told, it’s far from over, but the Coalition moved alarmingly fast to cancel its short ban on evictions and rent increases.

Minister for Housing Darragh O’Brien, a fierce opponent of Eoghan Murphy’s housing policies, continues his predecessor’s policies in office. In July 2019, he labelled co-living “bonkers” and called for a total ban, making it a promise in Fianna Fáil’s election manifesto. Guess what happened when he became the Minister? He ordered a review. In the meantime, his hated co-living projects progress, its developers benefiting from the inaction that will drive up the price of land in a recession. He had also election-pledged laws to prevent cuckoo funds muscling out first-time buyers, to reintroduce rent relief for tenants and to increase the vacant site tax. None of these promises made it into the programme for government.

The problem for successive governments’ dithering on acting against misbehaving industries is that they proved during early lockdown that action can be taken quickly. There was diligent and efficient legislation enacted on public health measures and social welfare payments as well as changes to planning and mental health laws. When the Government must act, it can, without the need for reviews and delays which harm citizens but empower wealthy businesses.

Oliver Callan is a writer and broadcaster