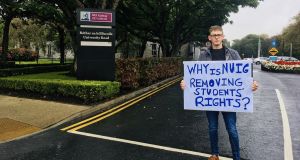 Final year NUI Galway law student Simeon Burke: “After reading the pledge, I became very concerned. I felt it undermined my rights as an NUI Galway student and threatened my freedom to think for myself.”

NUI Galway has dropped its mandatory requirement that all students must sign a pledge to adhere to public health advice and “behave responsibly”as a condition of registration for the new academic year.

The college announced last month that all students would be required to sign up to a community promise which requires signatories to behave appropriately, consider others and follow public health guidelines. Any breach of the pledge could trigger disciplinary processes, it said.

The pledge drew protests from a number of students including Simeon Burke, a final year civil law student.

“After reading the pledge, I became very concerned about it,” he said. “I felt it undermined my rights as an NUI Galway student and threatened my freedom to think for myself.

“In addition, I was uncomfortable with the requirement to disclose personal health data on an ongoing basis to the university.”

Mr Burke picketed the office of the university president’s office last week, raised concerns with university management and recorded a video outlining his concerns on social media, which received more than 100,000 views.

He said he received a reply from the university’s dean of students last week who said the “community promise is not a condition of registration to the university and you will be able to register in the normal way”.

Following a request for a public clarification of whether the pledge was no longer mandatory, he said the university updated its website page to state that the students were now “being asked” rather than “required” to sign the pledge.

When asked to comment, a spokesman for NUI Galway confirmed the community promise was now a “voluntary public commitment” and separate to registration.

He said the university “expects” students and staff to follow university and public health guidelines related to reducing the spread of Covid-19.

“The university is working with experts in behavioural change as part of planning for reopening the campus,” the spokesman said.

“Voluntary public commitments are a powerful approach to bring about lasting change and cúram dá chéile community promise is separate to registration.

“For this reason, we’ll be creating a roll of honour for students and staff to sign up to and we know the majority of our community want to commit to their health.”

He said the community promise was about working together to keep each other safe.

Mr Burke said the shift in the university’s position was important in recognising students’ rights.

“Students need to aware of the need to stand up and be clear when it comes to our rights. Otherwise, things can get bad very quickly . . . This shows that the students shouldn’t hesitate to speak up.”