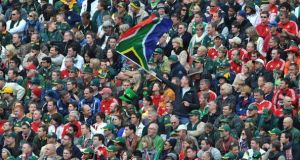 At this moment in time, the British and Irish Lions tour to South Africa and Tokyo Olympics are neither feasible nor safe sporting events to host. That is the view of Nphet virologist Dr Cillian de Gascun, in an interview with The Irish Times, who also dampened the idea of supporters returning to stadiums until the island of Ireland settles upon a collective strategy to suppress the Covid-19 virus.

“If there was one thing we could change, whether it is now, three months ago or six months ago, a combined approach between the two jurisdictions on the island would make sense from an infection perspective,” De Gascun told The Irish Times. “Not to play down the political challenges or cultural challenges but we are an island. The virus has to travel here from elsewhere. That is the one thing that could make a difference in the grand scheme of things.”

However, a workable blueprint does exist for community games and amateur sport to return whenever the daily cases click into double figures.

“I really admire what the GAA achieved last year and what they were able to get done. When we talk about lessons, that might be a model for sport to come back,” De Gascun said. “The key thing is to get schools back first. Then we can look at the activities that go along with that but it all comes back to the level of community transmission.”

Despite Jason Leonard, the Lions chairman, stating this week that a “traditional” tour of South Africa in July remains the aim, De Gascun sees a country gripped by a deadly variant.

“South Africa has a highly transmissible virus that is resistant to vaccination so that is not the destination you would be hoping for. Potentially it could be done in the UK, if everyone came over and quarantined.”

On the rescheduled Summer Games in Japan, he highlights the dangers around “bringing people from hundreds of different countries to a congested, complicated setting.”

“I know the authorities are very bullish about the Olympics, but I would adopt a far more cautious approach as it is an event that is tailor made for virus transmission. An athletes’ village is potentially manageable, but it is a very risky thing to do.”

In the grand scheme of things, it has also become apparent that large sections western society are struggling to mesh politicking with scientific rationale.

“Traditionally, we have looked to the US and UK for infection purposes because we work closely with them from an academic perspective,” said De Gascun. “We would often look to their guidance and their recommendations but that has been one of the strange things in this period, whether it is related to the leaders or what, but the fact they have had such difficult experiences during the pandemic has been the most shocking thing for me. Because obviously there are a lot of bright people working in infection specialties in those countries but, yet, they didn’t manage to get control on the virus the way other countries managed to do.

“That’s been sobering in some respects but also informative and probably no harm for us to look more widely at other countries to see what policies might work here and what won’t.”

During a wide-ranging interview, the virologist stated Ireland’s need for “some form of quarantine” and cross border agreement before sport can reopen for business amidst a pandemic that shows no sign of abating.

“I struggle to see very large gatherings along the lines of New Zealand or Australia unless the UK and ourselves decide to put an agreement in pace and adopt a joint approach.”