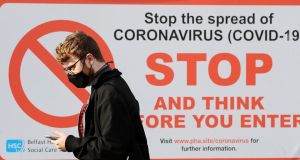 The Covid-19 testing and tracing systems in the North and the Republic have come under increased strain due to a sharp rise in Covid-19 cases in recent weeks.

Given the scale of cases per population there, and testing and tracing capacity indicators, the Northern Ireland system is under more pressure – amid accusations it is not rigorous and robust enough.

The system, according to the North’s Public Health Agency (PHA), is largely based on the one operated in other parts of the UK. The latter system has experienced persistent problems, culminating earlier this month in missing 16,000 positive cases due to a basic technical glitch. Lab test results were being transferred to Excel templates, which hit a limit in the number of rows they could handle, and failed to update when more cases were added.

The PHA confirmed, however, its contact tracing service has been enhanced, moving to a “digital first” model last week, including “online self-service contact tracing for the majority of people who test positive”.

Difficulties in the Republic are largely concentrated on the time it takes to get test results – which are averaging more than 100,000 a week – and to complete contact tracing, though test numbers and the extent of tracking are much greater here.

The marked differences between the systems and in their effectiveness makes North-South co-operation in responding to current case surges, where there is a high level of cross-Border movement, more difficult. This is further compounded by different criteria for testing – in the North it’s based on four symptoms/indicators; in the South it is five.

At least, contact tracing is working cross-Border in the sense that the StopCOVID NI proximity app and the COVID Tracker Ireland app “talk” to each other.

Dr Gabriel Scally, president of epidemiology and public health at the Royal Society of Medicine, has expressed particular concern about the North’s contact tracing system, as only half of positive cases there were being followed up.

Speaking to RTÉ, he described the English model of testing and tracing as “dreadful” – with Northern Ireland “a victim of that”. In addition, he said the response in the North has been “the most untransparent by a long way of any of the jurisdictions on these two islands.

“There is very little information produced about how well or, I think, badly, probably, their testing and tracing is. On the face of what little they do produce, they’re only reaching just over half of the positive cases, only about half of them are contacted in order to find contact tracing.” The daily cases being reported “probably don’t reflect the scale of the spread of the disease in the region”, he said.

It was “like groundhog day” until transmission is stopped at source through contact tracing. “They have to find out where people went, who they met, and do it relentlessly, otherwise they’re not going to get on top of the disease.”

Dr Scally said joint testing would track outbreaks on the island more effectively, and reiterated his view that a disease among livestock would prompt much more “seamless” co-operation between administrations North and South of the Border.

RCSI infectious diseases consultant Prof Sam McConkey said increased cases were overwhelming the system in the Republic. “Access to testing and getting results back is too slow. Contact tracing is too slow.”

Tracing was taking three to five days, and there was not enough staff for it, he said. Moreover, he believed contacts going back 10 to 14 days should be traced – instead of contacts going back 48 hours – including second generation contacts, eg friends of friends.

Specific expertise in “outbreak management” was urgently needed given such incidents were now running at 100 per day, Prof McConkey believed. Benchmarked against the highly effective contact tracing system in Wuhan, China, he had estimated Ireland needed 2,500 tracers.

The HSE is hiring 500 staff for its longer-term contact tracing operation as it moves from a system of relying on almost 300 volunteers and redeployed workers in eight contact tracing centres along with personnel from the Revenue Commissioners and the Defence Forces. In the North, there are 151 tracing staff, with a further 25 being trained this month.