‘No zero-risk scenario’: Hiring 1,000 extra teachers to be a challenge, accepts Minister 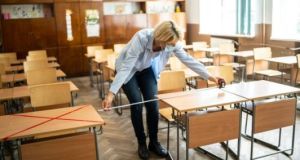 Under the plans, extra teachers will be hired to allow some schools to split larger classes to adhere to physical distancing rules of one metre between desks. File photograph: Getty

More than 1,000 additional secondary school teachers are to be hired as part of plans announced by the Government to reopen schools at the end of August.

A significant funding package of more than €375 million to support schools reopening was signed off at a Cabinet meeting on Monday.

Under the plans, extra teachers will be hired to allow some schools to split larger classes to adhere to physical distancing rules of one metre between desks.

Some €75 million in capital grants is being made available to schools for minor works, such as the reconfiguration of classrooms or refurbishment of toilet facilities.

Mr Martin said there was “no zero-risk scenario” but guidelines set out for schools would “dramatically limit the risk of the virus” to staff and pupils.

Minister for Education Norma Foley acknowledged there would be “challenges” in recruiting 1,000 secondary school teachers.

Restrictions on 1,300 teachers currently job-sharing are to be lifted to allow them to work more hours, and there will be a targeted campaign to recruit some of the 2,000 registered teachers not currently working in the education sector, she said.

Officials believe the pandemic may have led to some teachers on career breaks who were abroad returning to Ireland, who may be encouraged to take up work in schools.

Schools will be allowed to draw down capital grants to convert areas like PE or assembly halls into temporary classrooms if required. They will also be able to avail of funding to switch from double to single pupil desks.

Ms Foley said classrooms would in the first instance be “decluttered” to allow physical distancing between pupils. If that was not possible, schools would then look at repurposing other rooms, or using nearby facilities such as parish halls as a “last line” for classrooms.

Ms Foley said she was confident there would be a “very fast turnaround” on Garda vetting applications for recruited teachers.

Elsewhere, acting chief medical officer Dr Ronan Glynn has said he expects cases and clusters within the schools and childcare sectors as they reopen, but he is hopeful the experience and knowledge gained by public health teams and parents in recent months would prevent widespread transmission.

Emphasising that mixing of classes should be avoided, he said he hoped responses to outbreaks could be more “nuanced” than outright closure of a school.

Guidance would be provided for parents and schools in the coming days on managing common respiratory illnesses in children in the context of coronavirus, health officials said on Monday night.

The Association of Secondary Teachers Ireland (ASTI) said it was concerned the funding provided to schools may be insufficient and called for the supports to be regularly reviewed.

John Boyle, general secretary of the Irish National Teachers’ Organisation (INTO), said the coming weeks would be “the most challenging ever experienced by everyone in school communities”.

Clive Byrne, director of the National Association of Principals and Deputy Principals, said while the group welcomed the plan principals were now faced with “a short period of time” to implement the guidelines.

The Department of Health confirmed on Monday night there were no further deaths associated with Covid-19 in the State and 11 new cases were notified. There have now been a total of 1,764 deaths in the Republic and 25,892 cases.