‘It is just so surreal and so opposite to what the church is about. it is singularly terrible’ 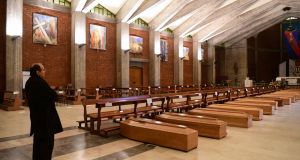 Parish priest of Seriate, Don Mario stands by coffins stored in the church of San Giuseppe in Seriate, near Bergamo, Lombardy, Italy during the country’s lockdown during the new coronavirus pandemic. Photograph: Piero Cruciatti/AFP via Getty Images

The Catholic Diocese of Down and Connor has taken the lead in deciding there will be no funeral Masses held during the coronavirus crisis, with other dioceses expected to follow suit.

Dioceses with big urban populations such as Dublin, Cork and Derry are continuing to allow funeral Masses.

Diocesan spokesman Fr Eddie McGee said Down and Connor took the decision because it is a large urban diocese, covering Belfast, and that holding services in an area with a large, close-quartered population increased the risk of spreading the virus.

Other dioceses contacted on Thursday said funeral Masses were still taking place, but generally just with immediate family attending, and that the situation remains under constant review.

Fr McGee said that in Down and Connor wakes were still being held at many deceased people’s homes but generally with just close family attending. In such cases the funeral cortege goes directly to the cemetery from the home.

“Some funeral liturgy resources are provided online so families can offer prayers in the home in the absence of a priest, while in some cases the priest can offer prayers remotely through computer loudspeakers,” he explained.

He predicted that other dioceses would “at some stage” progress to “the same measures as Down and Connor”.

Fr McGee said priests are continuing to administer the last rites to the dying, but while following social distancing rules in so far as possible. This included, he said, saying prayers two metres away from the sick person and applying holy oils using cotton buds rather than a finger.

Bishop of Down and Connor Dr Noel Treanor announced the halting of funeral Masses in the diocese in a statement on Wednesday night.

“In the cemetery, a short funeral prayer service will take place, respecting the determination of the public authorities in regard to inter-personal social distancing and any other provisions deemed necessary.”

Bishop Treanor said requiem Masses would be celebrated in memory of the deceased at a later date “when this pandemic has passed and when the conditions permitting gatherings of people in buildings and in Churches prevail”.

“It is simply too risk-laden to gather inside buildings even in small numbers . . . .To do otherwise would be unchristian,” he said.

Fr Michael Canny, spokesman for the Diocese of Derry and Raphoe, said funerals there were going ahead but few were attending in accordance with the protocols.

“In fact it is more so younger people [attending] because older people are often not coming out to them. We have had no issues with social distancing. Everybody seems to be scared of it [the virus],” he said.

Remarking on how coronavirus has altered what Irish people always did around deaths, Fr Canny said: “It is just so surreal and so opposite to what the church is about, and what we are all about, and everything we have been used to. It is just singularly terrible . . . but that is the situation we are in.”

A spokeswoman for the Dublin archdiocese said funeral Masses continued while the diocese “is alert to the fact that if the number of deaths increases significantly prayers could be conducted at the graveside”.

Fr Michael Keohane, diocesan secretary of the Cork and Ross diocese, said the situation was “fluid” and it continued to follow public health advice on funerals going ahead with restricted attendances and social distancing being observed.