Steve Bruce, his staff and players have been told to stay away from training ground 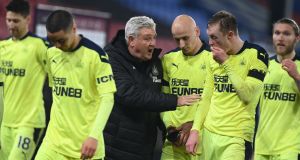 Should Newcastle ask for the Aston Villa game to be postponed it would be the first Premier League fixture delayed on such grounds since the resumption in June. Photograph: EPA

Newcastle United’s trip to Aston Villa on Friday has been postponed after the north-east club reported a “significant” rise in positive Covid-19 test results – a number believed to run into double figures – and the Premier League board agreed to defer the game.

It is the first top-tier fixture this season to have fallen casualty to a coronavirus outbreak. The Premier League had little option but to act after Public Health England advised that Newcastle’s training facilities should remain closed until Friday at the earliest.

With Steve Bruce’s squad unable to train safely, the league’s board consulted Villa and all parties swiftly agreed Newcastle could no longer prepare adequately. Further in-depth consultations with Public Health England and the league’s medical advisers convinced the board to postpone the game to protect the health of players and staff at both clubs.

Although Bruce could possibly have named the 14-man squad deemed acceptable according to the Premier League’s pre-season Covid-19 advisory protocols, the situation was further complicated by Newcastle’s need to fly to and from Birmingham and spend Thursday night in a West Midlands hotel.

All senior professionals and backroom personnel at St James’ Park will be retested this week when a further meeting between Public Health England, the Premier League and club officials will take place to analyse the source of the outbreak and assess strategies to limit any reoccurrences.

Newcastle declined to give any details of those affected on grounds of medical confidentiality but it is believed up to 10 players and a number of backroom staff have been affected. The club say “several” players and members of staff are self-isolating in the wake of positive tests.

Bruce is unsure whether the outbreak stemmed from players returning from the international break carrying the virus – Sweden’s Emil Krafth was an unexplained absentee as Newcastle won 2-0 at Crystal Palace last Friday – or closer to home. The midfielder Isaac Hayden missed the visit to Selhurst Park because of illness; Bruce’s assistant Steve Agnew was absent as Newcastle lost against Chelsea the previous weekend.

Last Friday Newcastle were understood to have recorded four positive tests – three players and one staff member – but, by Sunday, when all personnel were retested and the training ground closed, that number was believed to have risen to seven, including five players. Further positives in the past 48 hours effectively left the Premier League with no choice but to order a rearrangement.

In a statement the club defended their “comprehensive” training-ground protocols, pointing out they were among the first clubs to respond proactively to the coronavirus threat before the first national lockdown last March and had, until recently, had only a very small number of cases. - Guardian