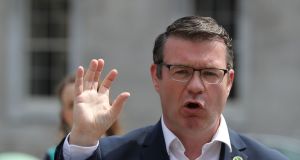 “We stand over the slow, steady approach,” said the Taoiseach as a simmering mash of city crowds and bright sunshine transformed beauty spots into giant Covid fermentation vats.

Although maybe “we” wasn’t the best choice of word, with a waiting Alan Kelly across the way, cheerily priming his gasket in advance of blowing it.

At least Leo Varadkar has the weather on his side. The forecast for the weekend isn’t great, so that should cut right down on numbers socially sardining in defiance of the health guidelines. He thinks everyone has been doing a great job helping to suppress the virus.

Unfortunately, though, the economy is going to hell in a handcart. So don’t get too carried away

In his latest bulletin from the pandemic front, the Taoiseach thanked the Irish people for sticking with the restrictions of The Great Reopening, but warned of the need to “stay vigilant”. If we play this by the book, the Government will be able to further lift restrictions. He told the Dáil to await a fresh dispatch early next month.

So well done everyone.

Unfortunately, though, the economy is going to hell in a handcart. So don’t get too carried away.

Minister for Finance Paschal Donohoe outlined the grim prospects on Wednesday. His boss continued with the bad news on Thursday.

Unemployment. Reduced living standards for many. Infrastructure costs rising. There will have to be large amounts of borrowing.

“On the upside, we haven’t been shut out of the money markets.”

“So the next government, whenever it takes office, will have to sail the ship of State through the hardest of rocks and the toughest of hard places.”

It won’t be easy, but steering the way to safety “can be done”, he reassured the nation.

And who (hint, hint) might be the leader to do that?

The Fianna Fáil leader was next up with a sensible contribution on the crisis, a statesmanly bit at the end about co-operation between the EU states, and some well-justified criticism of the way the Government has handled the unwinding.

“The division between shops that are allowed to open and those which must remain closed simply makes no sense,” he said, citing the “foolish” distinction between hardware and homeware stores.

It seems Micheál is a curtains-over-cans of paint man.

‘I don’t play golf,’ stressed Micheál, anxious not to see his rating plummet further in polls

Small businesses kept shuttered will applaud him for calling out those grasping big stores “actively trying to fill the gaps” in their absence from the market.

“There is clear unfairness in that.”

And what is the sense in opening the golf courses but only allowing access to people who live within 5km of them?

“I don’t play golf,” stressed Micheál, anxious not to see his rating plummet further in polls.

But he doesn’t want to appear difficult in a time of crisis. And he is also negotiating to go into government with Leo Varadkar.

“I say this in a helpful way.”

Micheál had given the Ceann Comhairle food for thought.

“Next is deputy McDonald,” he said, as the Sinn Féin leader rose to her feet. “Do you play golf, by the way?”

She looked a bit taken aback.

“No, not as of yet, Ceann Comhairle, but who’s to say? I might be resigned to playing golf if it is so desired by the public. Let’s hope not.”

Was it our imagination or did Eamon Ryan sound more focused than usual? Nothing like an imminent leadership challenge to sharpen the game. The Green Party leader asked a number of questions. The Taoiseach thought his ideas about making more space available for cyclists and pedestrians during the crisis was excellent.

“Every crisis does create opportunities,” said Leo, and he wasn’t referring to the leader of the Labour party, who was psyching himself to perform one of his famous scenes.

He managed to say ‘bonkers’ three times, just in case the headline writers didn’t hear it straight off

This time, Alan Kelly was like a dog with a bone, worrying away at the health guidance for gatherings in Leinster House which landed among politicians on Tuesday morning and has been causing ructions every since. If Dáil proceedings are run according to them, it means no TD will be able to spend more than two hours in the chamber in any 24-hour period.

Alan even brought along a prop.

“I’ve my stopwatch with me because I’m back here later on. Not a joke.”

The was nothing for it but to blow another gasket. It’s what he does best.

The advice is totally unrealistic, he fumed. “It is absolutely bonkers. It’s bonkers.” He managed to say “bonkers” three times, just in case the headline writers didn’t hear it straight off.

Then he quoted George Orwell.

He also introduced a new word to us. He threw it around with abandon, returning to it when bearding the Minister for Health later in the afternoon with his same objections about important information which was only “socialised” to people at the beginning of the week.

“Why was the public health information not socialised earlier?” he demanded.

It sounds like corporatespeak, as in, “Hey guys, let’s socialise this idea with the stakeholders and harvest the learnings . . .”

Simon Harris, who is somewhat impressionable when it comes to this sort of thing, then started using it in his replies. This must be stopped.

However, he is forgiven because of the sweet way he bunged Alan’s gasket firmly back in place after being harried by him over the unworkable social distancing guidelines issued to the Oireachtas on Monday. Did NPHET (National Public Health Emergency Team) know anything about this? Why did NPHET not issue similar instructions for other workplaces?

“You’re obsessed with NPHET. You’’ll be blaming NPHET for Covid next.”

“OK, I withdraw that,” muttered the Minister.

So fast you could barely hear him socialise it.