Some 40,000 doses per week to be administered to priority groups in January, February 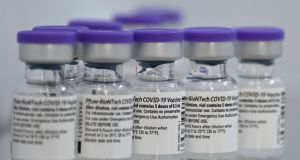 Millions of vaccine doses against Covid-19 will be available in Ireland monthly, but not until the second half of the year, according to officials working on the rollout of the immunisation programme.

About 40,000 doses a week of the Pfizer/BioNTech vaccine will be administered to priority groups in January and February, after which volumes will scaled up, according to a Health Service Executive briefing on the programme.

However, officials are reluctant to specify how many vaccines doses will be available from March on due to uncertainty over vaccine supply and authorisation.

The number of new people receiving the vaccine will actually fall for a while at the start of February due to the requirement to use stocks in providing a second dose for the first groups of people to have received the vaccine.

Aside from one week’s contingency supply, no stocks will be held back, under the “rolling stock” model developed by the taskforce overseeing the rollout of the vaccine.

Up to Thursday, 15,000 people had been administered the vaccine, and the total target for this week is 35,000.

Recipients this week include 32,000 healthcare workers in seven hospital groups along with several thousand residents of nursing homes.

Some GPs in Cork, the midland and Dublin have been vaccinated as part of hospital-based immunisation, officials say.

Next week, vaccinations will be administered in 182 nursing homes, compared with 25 this week. Coverage of about 80 per cent is targeted, and officials hope to complete immunisations in all nursing homes earlier than the target time of late February. Vaccination of all frontline health staff is expected to be completed by March.

The European Commission’s announcement of Friday of a doubling of its original order for the Pfizer/BioNTech vaccine will mean an additional 3.3 million doses for Ireland.

In total, 15 million doses of five different vaccines have been ordered for Ireland, but some of these have yet to be authorised in Europe and most supplies are not expected until later in the year.

A second vaccine, developed by US drug firm Moderna, was authorised by the European Medicines Agency (EMA) this week but is not expected to make a big difference to Ireland’s immunisation plan. About 10,000 Moderna vaccines a week are expected to come available in the spring but no delivery plan is yet available.

An EMA decision on the Oxford/AstraZeneca vaccine may be made by the end of this month, Irish officials believe. The drug maker is to apply for approval next week.

This vaccine, of which Ireland has ordered 3.3 million doses, is regarded by officials as a potential “game-changer” because it has no special transport requirement and would therefore be easy to administer by GPs and others in the community.

The chair of the National immunisation Advisory Committee, Prof Karina Butler has described as “encouraging” the developments with the AstraZeneca vaccine.

“It would be very good news,” she told RTÉ radio’s News at One. The “more forgiving” aspect of the AstraZeneca vaccine would make it ideal for community roll out of the vaccine through pharmacists and GPs.

The AstraZeneca vaccine does not have the same stringent requirements as the Pfizer vaccine. It was not as time sensitive, she explained.

Ireland would stand to get a large tranche of the vaccine which would enable the vaccination programme to extend to “more people very quickly” she said.

The rollout plan is based on an expectation that five doses can be obtained from each vial of vaccine supplied, but officials say a sixth dose, and in some cases a seventh, can be obtained, meaning more people can be immunised than originally envisaged.

In some cases, using specialist syringes, a seventh dose has been obtained from some vials. This led to in some cases to non-priority groups being vaccinated in one hospital so as to avoid wastage, according to officials.