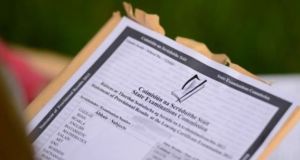 ASTI has concerns about the Leaving Cert calculated grades process

The Association of Secondary Teachers Ireland (ASTI) has said it is pleased the Leaving Cert has been “preserved” but is concerned about the calculated grades process.

Ann Piggott, president of the ASTI, said although her members were glad students were “relieved and happy and have clarity” about the Leaving Cert, the union had reservations about the proposed methods for teachers to calculate grades.

When asked when the ASTI, which represents 18,500 teachers, would respond to the new Leaving Cert plans, Ms Piggott said she would consult the union’s executive about co-operation with the new system and that a decision could be made in days.

The union did not want any more stress on students, she told RTÉ’s Morning Ireland on Thursday.

The Government confirmed on Wednesday that all Leaving Cert students will be given the option of choosing predicted grades or sitting exams in June this year.

This will allow students to pick and choose between predicted grades or written exams – or both – for individual subjects, and secure whichever grade is highest.

Oral exams will be held during the Easter holidays or shortly afterwards for students who opt to take exams. Students who opt for predicted grades only will not be required to complete these exams.

In some subjects, the holding of practical exams will not be possible due to public health considerations. Details on these are due to be confirmed shortly.

Ms Piggott said the ASTI “always” had reservations about a calculated-grades system and that remained the position, so the union was glad an alternative option of a traditional Leaving Cert was being offered, she added.

She said the union favoured orals and project work being assessed externally to “ground” the results and to give “credibility or raise it up in a way”.

The ASTI was concerned students would not be motivated in the coming months if they opted for calculated grades, she said, and there was the challenge for teachers of having two cohorts in the classroom – one group studying for the traditional Leaving Cert with the other group opting for calculated grades.

Expressing concern over the calculated grades process, Kieran Christie, general secretary of the ASTI, said there were some logistics to the process that could not be “fed into a computer”.

Some students had been determined to do “a proper” Leaving Cert, and they would now have that option, he he told Newstalk Breakfast.

Mr Christie said he was glad the ranking system from last year’s calculated grade process was gone. “Thankfully teachers don’t have to do that,” he said. Students who were at the lower end of the ranking process could have been bitter about that, he added.

Dates for reopening would have to come from other sources such as public health experts, he said, but added the numbers and the indications were positive.

“The Minister has given dates in the past and has had to row back. I’m not going to fall into the same trap,” he said.

Elswhere, the Teachers’ Union of Ireland (TUI) president said calculated grades should have been a contingency plan not an option for this year’s Leaving Cert.

Martin Marjoram told RTÉ’s Today show the union was pleased students now had clarity on this year’s Leaving Cert but said his members were deeply concerned that some students would cease to engage with the process.

The TUI had consulted with its executive on Wednesday night and would be discussing the proposals with branches in the coming days.

Mr Marjoram said his opinion was assessments would cause as many difficulties as solutions and there would be “huge” difficulties with the process. There was “significant” unrest among his members, he said.

The union was not saying it would not be co-operating with the new proposals, he said, adding it was going to present the full details of the “very complex” proposals to members.

The chairman of the CAO, Pól Ó Dochartaigh, warned there will not be additional university places. Universities would adjust their entry points on the basis of the number of places available, he said, also speaking on RTÉ’s Today show. “There is no space to pile in extra numbers.”

If grades were inflated then the points would be inflated, he said. “This does youngsters no favours.”

It was important there be consistency in the comparability of grades, Mr Ó Dochartaigh said, adding it was important to ensure there was the same level of achievement between calculated grades and the traditional Leaving Cert.

Minister for Education Norma Foley has acknowledged there will be penalties for anyone who attempts to lobby teachers about calculated grades for this year’s Leaving Certificate.

Any type of canvassing would not be appropriate and measures were being examined such as penalties, she said on RTÉ’s Today show on Thursday.