On Monday, Ireland’s restaurants and cafes can reopen their doors to customers, more than three months after Covid-19 restrictions forced them to close. Video: Enda O'Dowd 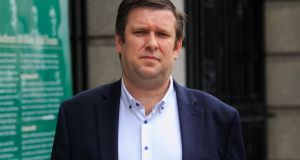 Landlords renting commercial premises have not stepped up to the plate and taken their “fair share of the pain” during the coronavirus pandemic, the Restaurants Association of Ireland (RAI) has told the Oireachtas Covid-19 committee.

Landlords of restaurants and other small businesses were demanding full payment of rent at pre-coronavirus levels, despite premises being closed for several months, RAI chief executive Adrian Cummins said.

Restaurants had seen little or no payout from insurance companies for business disruption cover over the national lockdown, no haircut on rents, and in some cases utility companies had disconnected premises, Mr Cummins said.

“A lot of people will have to close their doors because the landlords are not playing ball,” he said.

The Covid-19 committee was hearing from representatives from the hospitality sector, vintners, and the events industry on Tuesday.

“We want the same protections that residential tenants have for commercial tenants,” Mr Cummins told the committee. “Landlords have not stepped up to the plate to take their fair share of the pain that all businesses are suffering at the moment,” he said.

“We need some sort of burden sharing for the landlords where everybody has to take a cut: banks, landlords,” he said.

The State needed to set up a forum to bring all parties to the table to avoid a “tsunami” of business closures, he said.

Sinn Féin TD David Cullinane said it was clear that appealing to the “goodwill of landlords” to relax rent payments was not working.

If the hospitality sector did not receive significant support in the Government’s planned economic July stimulus, and in other measures such as a reduction in VAT, half of all restaurants would be forced to close, Mr Cummins claimed.

Padraig Cribben, chief executive of the Vintners’ Federation of Ireland, which represents pubs outside of Dublin, said he was “perplexed” that some pubs could reopen if they served food.

Pubs can reopen if they can operate as restaurants and serve a substantial meal costing around €9, while the rest of the sector must wait until July 20th to reopen.

Mr Cribben said all pubs should “have been allowed open on the one day,” with specific public health guidelines in place. “It baffles us how having a meal makes something safer than not having a meal,” he said.

Green Party TD Steven Matthews said there was a “huge onus” on pubs to manage physical distancing and time limits for customers. He questioned if pubs would be liable if an outbreak of coronavirus was linked to the premises.

Mr Cribben said pubs renewing their insurance policies had been made aware “you’re on your own” if somebody took a claim against them over a coronavirus outbreak.

Tim Fenn, chief executive of the Irish Hotels Federation, said 180,000 of the 270,000 jobs supported by the tourism sector were “at risk” in the fallout from the pandemic.

The sector needed a reduction in VAT to 5 per cent until the end of next year, and for the temporary wage subsidy scheme to remain while social distancing requirements were in place, he said.

Mr Fenn added the wage subsidy scheme was “manifestly unfair” as it did not support hotels which operated on a seasonal basis.

The impact of the coronavirus crisis on the arts and events industry had been “unprecedented and devastating” Elaine O’Connor, co-founder of the Event Industry Association of Ireland, told the committee.

Government funding provided to Fáilte Ireland and the Arts Council “would not filter down” to artists and workers in the events industry, she said.

Shane Dunne, deputy chairman of the Event Production Industry Covid-19 Working Group, said the sector “has lost an entire year’s worth of turnover,” and had no roadmap from the Government for how it would recover.