UK prime minister Boris Johnson has promised to act fast to boost spending on infrastructure in the face of the looming recession. 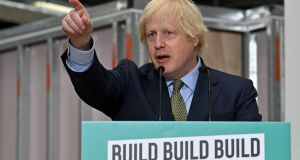 Boris Johnson has promised to act fast to boost spending on infrastructure in the face of the looming recession, as he returned to his manifesto pledge of “levelling up” the UK in the aftermath of the Covid-19 crisis.

Delivering a major speech in Dudley College of Technology, at a podium emblazoned with the slogan “build, build, build”, the prime minister claimed his government would tackle the long-term problems in the UK economy revealed by the “lightning flash” of the pandemic.

Acknowledging the scale of the oncoming downturn, he said: “We must work fast, because we’ve already seen the vertiginous drop in GDP, and we know that people are worried about their jobs and their businesses.

“And we’re waiting as if between the flash of lightning and the thunderclap, with our hearts in our mouths, for the full economic reverberations to appear.”

But unlike David Cameron and George Osborne’s 2010 government, Johnson insisted his administration would not impose spending cuts while the economy was weak.

“We’re not going to cheese-pare our way out of trouble, because the world has moved on since 2008,” he said, warning that, “too many parts of our country have felt left behind, neglected, unloved”.

The prime minister also unveiled what he called “the most radical reforms of our planning system since the end of the second world war,” which he said would make projects faster and better value.

He said planning rules would be changed by September, to allow:

- Developers to “demolish and rebuild” vacant and redundant residential and commercial buildings if they are rebuilt as homes.

- A wider range of commercial buildings to be switched to housing without a planning application.

- Property owners to build “additional space above their properties”, via a “fast track approval process”.

The government said the changes would allow defunct buildings on high streets to be repurposed to create homes more easily, helping to reduce pressure on the greenbelt.

Some types of property, such as community pubs and libraries, would be exempt from the new regime.

Johnson signalled the changes as he promised a “Rooseveltian” boost to infrastructure spending, with projects including upgrades to schools and hospitals, and transport improvements.

However, critics have pointed out that the £5bn infrastructure boost is relatively small-scale - particularly when measured against the scale of the looming recession.

Official figures published on Tuesday showed the economy contracting by 2.2 per cent in the first three months of 2020 - the fastest rate for more than 40 years.

The backdrop to Johnson’s speech, with trainees in hi-viz jackets, was reminiscent of his bullish general election campaign, before the pandemic threw his programme for government off course.

The planning changes appeared less sweeping than some of those previously under consideration in Whitehall, including the creation of “development corporations”, like the one that oversaw the transformation of London’s Docklands.

Labour had warned against any changes that would put more power in the hands of the housing secretary, Robert Jenrick, who has been under pressure over “cash for favours” allegations involving billionaire developer Richard Desmond.

Johnson’s speech is part of a concerted attempt by the government to switch the focus back to its manifesto priorities, and offer something tangible to voters in former-Labour seats the Tories won in December.

It will be followed up next week by an economic statement from the chancellor, Rishi Sunak, which is expected to focus on jobs and training, in a bid to prevent unemployment surging when the furlough scheme is wound up in October.

An extraordinary 9.3 million workers are being supported by Sunak’s unprecedented “job retention scheme”, and many industries are warning that physical distancing guidelines will still make their businesses uneconomic, even as lockdown is lifted.

Johnson said young people would be offered an “opportunity guarantee” to prevent them falling into long-term unemployment. He conceded that his plans would involve significant government intervention - but said he still believed in the free market.

“I am not a communist,” he said; but “it’s time now not just for a new deal, but for a fair deal for the British people.”

Monday’s announcement by health secretary, Matt Hancock, of a local lockdown in Leicester underlined the fact that the covid-19 crisis is far from over, even as pubs and restaurants across the rest of England prepare to open on Saturday.

Johnson acknowledged that it might seem premature to be discussing rebuilding projects, but he insisted: “We cannot simply continue to be prisoners of this crisis.”

He said it was important to set out the government’s intentions, “so that everyone can think and plan for the future”.

Johnson repeated his promise to learn the lessons of the pandemic - but said “some things went right, and emphatically right”.