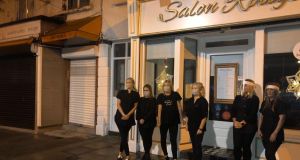 The staff of Salon Rouge in Inchicore as it reopened at midnight.

A baton twirler and a school teacher walked through the doors of a Dublin salon seconds past the stroke of midnight on Monday and became the first people to get legal appointments with an Irish hairdresser since the darkest days of mid-March.

“Do we have to wait until a minute past or can we do it as soon as it hits 12?” wondered one of the team of nine stylists from Salon Rouge in Inchicore as they stood shivering outside the darkened premises just before the appointed hour and waited, not entirely patiently, to stream the grand and early re-opening live on Facebook.

“I dunno,” answered another as her short-sleeved uniform billowed in a hair-do challenging gale. “Can we not just open now and go back inside now I’m bleedin’ freezin’.”

And then - like a most surreal New Year’s Eve - the moment was upon them. There was a countdown from 10 to one and the bright lights of Salon Rouge were thrown on and seconds later the very first customer walked in to be greeted like everything was normal.

“It’s great to be back,” responded Mary Sexton with a smile and a confused look in the direction of The Irish Times.

“We decided to come back at midnight to give the re-opening a bit of buzz, a bit of excitement and not just make it all about Covid,” Curry explained when asked about the late night/early morning opening on a day when Ireland entered phase three of the lockdown exit and took a big step towards normal.

It wasn’t really all that normal though and there were reminders of Covid everywhere. “We are trying to keep it as simple as possible because staff and clients will get confused if we don’t,” Curry said.

In front of her on the reception desk was a thermal temperature scanner, a box of face masks - €2 each - and a large bottle of hand sanitiser.

Jen Moss was one of the stylists almost ready to go. “I’m so excited to be here,” she said. “Mind you I am just passing through and am off to my bed now but I’ll be back at 6am and I’ll work till five. It’ll be a bit like Christmas...without the presents.”

She cast her eye over the appointment book and noted that they had clients throughout the night and early morning.

“There’s Mary who’s getting a colour and cut and Patrick is booked in for his eyebrows. He actually did his work experience here years ago,” she said.

Both Mary and Patrick are locals and loyal, Curry added. “We’ve a lot of the older clients too who would come in every week to get their hair done and for them it is a really social thing and the lockdown has been really hard. They have missed the place terribly and I’m really looking forward to them coming back,” she said.

As Sexton approached the desk she was given a face mask and spritzed her hands before being led to her station with her “bits” put in a bag rather than a cloakroom.

Why was she there at such a time, we wondered.

“I think Tish saw me walking past a few days ago and had one look at my hair and took pity on me so squeezed me in,” she said. “I’ll probably be the first person to get my hair done in the country in months... legally at least.”

She said she had been coming to Salon Rouge since it opened more than 15 years ago and admitted to cutting her fringe herself in recent weeks. “That was definitely a mistake,” she sighed.

Curry peered at Sexton’s roots before the Holly the stylist set to work. “Apart from the fringe she hasn’t touched it,” she noted approvingly. “She has stayed loyal.”

Patrick Brennan was equally loyal. He bounded through the door minutes later and announced that he was getting his eyebrows waxed and tinted. “I have missed them all,” he said sweeping his arm in an arc towards the staff. “I’ve been coming here for a long time I come especially when I have a competition.”

“Yes, I do baton twirling and freestyling and before an event I come for my eyebrows and the spray tan. I’m not nervous coming here tonight. They always look after me, I know that.”

As he talked, Sexton her head now smeared with colour which would soon be copper nodded. “They are part of our community and have been for a long time. To be honest I’ve been very nervous about Covid-19 and I’d be scared to visit a lot of places but not here. I know them well and there is great comfort in that familiarity.”

As she went back to her roots, Curry fiddled with something unfamiliar, a plastic face visor. “We had to go through about 10 models before we could find one that worked for us,” she said. “So many of them kept fogging up. And you can’t blow dry someone’s hair if you can’t see it, can you?”