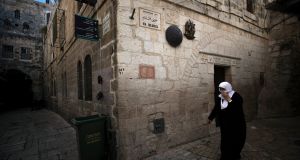 A Palestinian woman covering her face in Jerusalem’s old city. Over half of the elderly coronavirus patients in Israel hail from the ultra-Orthodox Jewish sector. Photograph: EPA/Atef Safadi

After a one-month nationwide lockdown succeeded in significantly reducing Covid-19 infections, Israel has decided to ease some restrictions, starting on Sunday.

The relaxed measures do not apply in areas defined as “red” – mostly ultra-Orthodox communities – which still have high morbidity rates, and the restrictions are to be reimposed nationwide if infections start to rise again.

Israel emerged from its first lockdown in the spring with low infection rates but there was no staggered exit strategy and after a few weeks infections begin to rise again. By September the country had one of the highest Covid-19 infection rates per capita in the world, prompting the imposition of a strict nationwide second lockdown last month.

Infections have now dropped to below 2,000 a day from a peak of more than 9,000 and the R number – the average number of people every infected person goes on to infect – has dropped to less than 0.8, meeting the two conditions set by health authorities for easing the lockdown.

From Sunday people will be permitted to leave home with no restrictions on distance and to meet with others as long as the regulations on assembly are not violated.

Kindergartens and businesses that do not have reception hours will be able to reopen, and restaurant customers may pick up their orders themselves. Nature reserves, national parks and beaches will also reopen.

The controversial strict limits on demonstrations – criticised as an attempt to muzzle the ongoing protests against prime minister Binyamin Netanyahu – have also been rescinded.

Ben-Gurion airport near Tel Aviv, the country’s main international airport, has also reopened, and passengers who have valid tickets for flights are allowed to travel on roads eight hours before takeoff.

Urging a “gradual and responsible exit strategy”, Mr Netanyahu told a coronavirus cabinet that the lockdown had been a “huge success”.

Naftali Bennett, head of the Yamina right-wing opposition party, said the lockdown was anything but a success.

“A lockdown is not a success; it is a devastating blow that destroys the lives of millions of people. The second lockdown was unnecessary, and it was the result of a terrible managerial failure of the government.”

There was also criticism from ultra-Orthodox politicians over the fact that most of the poor and densely-populated community will remain under strict lockdown. Knesset member Moshe Gafni of the United Torah Judaism party called for the dismissal of coronavirus co-ordinator Prof Ronni Gamzu, saying what counted for him was not the number of sick but rather if they were ultra-Orthodox.

Despite the decision to ease the lockdown health minister Yuli Edelstein warned that this was only the beginning of the end. “There is still a long road ahead, and we will do it together,” he said.