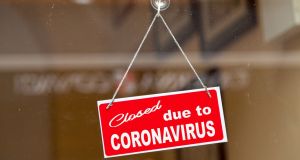 The Government’s plan would see employers declaring they were “unable” to pay full salaries at this time. Photograph: iStock

An employers’ group threatened to advise its members to ignore the State’s scheme to cover 70 per cent of laid-off workers’ wages, unless problems with the emergency Covid legislation being debated on Thursday were fixed.

The Law Society also wrote to the Government on Thursday expressing “major concern” over the proposals. The society said it was “unlikely most employees would avail” of the wage subsidy scheme unless it was changed.

The Irish Small and Medium Enterprises Association (Isme), which represents about 10,500 employers, described parts of the emergency legislation when it was first published as “tone deaf” to the concerns of business.

The Government had promised to refund employers up to 70 per cent of wages of staff in companies hit by the Covid-19 crisis until the end of May under a wage-subsidy scheme, provided the staff were kept on the books and not let go.

However, several conditions were originally attached to the scheme that employers said would wrap them up in red tape.

One was that employers who avail of it would have their names published by Revenue. Isme strongly objected to this condition and raised its concerns with the Department of Business and Department of Finance on Wednesday night.

“Publication by Revenue is something that is usually reserved for tax defaulters,” Neil McDonnell, Isme’s chief executive, told The Irish Times.

“The ostensible objective of the scheme is to get employers to continue to pay workers. But the notion of publication sends the wrong message. It is treating companies in a crisis as if they were tax defaulters. It is tone deaf.”

Another major issue employers had with the proposals was that industry groups were unsure how much financial difficulty a business needs to be in to avail of the supports.

In the original proposals, employers were asked to sign a declaration saying they are “unable” to pay the full salaries. Mr McDonnell warned this would mean companies effectively admitting they are insolvent but continuing to trade, which could expose them to legal difficulty as this is normally barred.

“Are you expected to have exhausted all of your working capital first before you sign up?” said Mr McDonnell.

The Law Society told the Government that this provision was problematic and it suggested amendments in its letter on Thursday.

The 70 per cent subsidy scheme is capped at €410 per employee per week and employers are allowed to top up the wages. However, the top-ups are not tax deductible for companies, which Isme also raised concerns over.

Earlier on Thursday, employment lawyer Richard Grogan told RTÉ’s Seán O’Rourke show that he would also advise employers not to sign up to the scheme as it was originally drafted due to its problems.

Mr McDonnell said he hoped the concerns could be addressed in amendments to the Bill at committee stage on Thursday night.

“To me it is a slam dunk,” said Mr McDonnell. “If it goes through as is, it might be easier for employers to avoid the scheme and tell staff to avail instead of the Covid payments (fast-tracked social welfare payments for affected workers).”