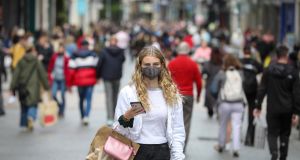 While a fluctuating infection rate is to be expected, given the high transmissibility of the virus, this week’s warning must shake us out of any complacency and prompt the State to redouble its efforts. Photograph: Crispin Rodwell

After the trauma of early Spring, the past few weeks have brought some much-needed respite. Families have been able to cross the country for a holiday. Retailers have opened their doors. Children have seen their grandparents. Many business owners and the unemployed have continued to struggle, of course, and the bereaved will always carry their loss with them. But in small ways, thanks to a consistently low infection rate across the country, we have adapted to the new normal.

The news that 85 new cases – the highest number in two months – were recorded in the State on Thursday will have come as a jolt, then. The spike is certainly cause for concern. It also reflects a trend in infection rates across the world, not least in Europe, where a period of low transmission has given way to rapid resurgences. Spain, France and Germany, where the virus was under control, are now battling new outbreaks on a large scale. Parts of eastern Europe, such as Poland, which had escaped the worst of the disease in the Spring, are now seeing significant spikes. England has had to reimpose a partial lockdown in the North. Farther afield, the United States, which reopened with reckless haste, is recording catastrophic numbers. The virus is flourishing in India, Brazil and Russia.

But now is not the time to be fatalistic, or to resign ourselves to another large-scale reoccurrence of the virus. It is too early to say whether Thursday’s numbers indicate a sudden upward trend or whether, more encouragingly, they may attest to the effectiveness of a test-and-trace system that aims to rapidly track down the disease wherever it appears. We can take heart from the fact that so few people (six, as of Thursday) are in hospital with Covid-19; that take-up of the tracker app, at almost 1.5 million downloads, has been extremely high; and that the vast majority of people have been following public health advice on distancing, hygiene and masks. The State is carrying out up to 8,000 tests a day, with a positivity rate of less than 0.5 per cent.

But while a fluctuating infection rate is to be expected, given the high transmissibility of the virus, this week’s warning must shake us out of any complacency and prompt the State to redouble its efforts. The policy priority, with the virus under control, is quite rightly the reopening of schools. If that requires mass regular testing of children and teachers, it should be considered. If it means imposing local restrictions where clusters arise, so be it.

Until a vaccine becomes available, living with the virus will entail living with some degree of risk. But, equipped with our ever-growing knowledge about Covid-19 and about our own capacity for resilience and solidarity, we – the State and its citizens – can minimise those risks and preserve the hard-won gains of recent months.