Healthy 32-year-old called for vaccination after miscalculation gives him BMI of 28,000 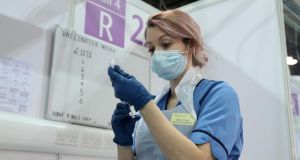 Europe has been watching agog as the NHS has raced ahead with its Covid-19 vaccination programme, which had inoculated 15 million people in the UK by last weekend. But the huge effort, which has far outpaced most other countries’, hasn’t been without glitches, as Liam Thorp discovered when he received a surprise text asking him to come for his first jab. And now the healthy 32-year-old’s Twitter account of what had gone wrong has gone viral.

“So I’m not getting a vaccine next week,” he tweeted today; “was feeling weird about why I’d been selected ahead of others so rang GP to check. Turns out they had my height as 6.2cm rather than 6 ft 2, giving me a BMI of 28,000.”

Thorp, whose job reporting on the coronavirus crisis as political editor of the Liverpool Echo means he’s “well aware of how far back in the queue” he should have been, wasn’t expecting to be classed as at high risk from Covid-19. “I mean I’ve put on a few pounds in lockdown but not that many... When I told my mum I had been classed in the clinically obese category, she said ‘well perhaps this is the wake-up call you need.’”

So I’m not getting a vaccine next week - was feeling weird about why I’d been selected ahead of others so rang GP to check. Turns out they had my height as 6.2cm rather than 6 ft 2, giving me a BMI of 28,000 😂

He wrote in the Liverpool Echo today: “For reference, a BMI of 40 or more is considered morbidly obese – so I’m not sure what this would have made me.”

When his GP’s surgery called to explain what had gone wrong, “the man’s nervous tone cracked into a laugh when I joked about putting on weight and losing a significant amount of height during the lockdown. If I had been less stunned, I would have asked why no one was more concerned that a man of these remarkable dimensions was slithering around south Liverpool.

“But there actually is a potential issue that this turn of events has brought to life... So I got in touch with the local Clinical Commissioning Group, like the diligent, tiny, morbidly obese journalist that I am.

“While seeing the fun of the situation, they said it is important for people who think they may have been wrongly invited for a vaccine to contact their GP to see if there has been a mistake.”

Thorp’s Twitter recounting of his experience has already been liked more than 100,000 times and retweeted more than 12,000 times, including by the food writer and TV cook Nigella Lawson and the physicist and science presenter Prof Brian Cox.