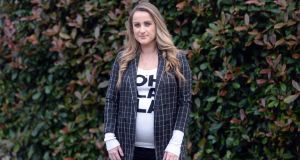 Justine King, from Co Dublin, says it was a total shock when she found out she had Covid-19. Photograph: Dara Mac Dónaill / The Irish Times

Justine King: ‘I’m pregnant, so we have been extra careful’

Justine King (33) is a fashion stylist and broadcaster based in Dublin. She is currently 27 weeks pregnant.

“I got Covid from my partner,” she says. “For us it was a total shock. I’m pregnant, so we have been extra careful about making contacts. My partner had a mild cold on December 22nd. Because it was so close to Christmas, he wanted to go for a precautionary test.”

King’s partner took a HSE test on December 23rd, and was told it would probably be two days – Christmas Day – before his result came back. “So he paid for a rapid test on the morning of Christmas Eve. The result came back positive in 20 minutes.

“We were amazed. No one he knows or has been in recent contact with has tested positive. We kept waiting for someone to call us to say he had been a close contact to someone else who had tested positive, but nobody did. We think he must have got it in a shop, but the truth is, we don’t know where he got it.”

Their Christmas plans were abandoned. They had planned to visit King’s parents and her sister on Christmas Day. “We were just so grateful he hadn’t waited for the results of HSE test, and took the rapid test, so we found out before going to the house.”

Their family dropped off a Christmas shop to them.

It shows us how easy it is to pick up the virus, and had made us even more cautious than we were

On Christmas Eve evening, King started to notice a sore throat and a tickle. On Christmas Day, she woke up with a cold. “Then I got kind of a burning smell in my nose. Next day, I had lost my sense of smell and taste, and developed a chesty cough. Being pregnant, all I could take was lemon and hot water.”

King took a test on St Stephen’s Day, and got a positive result the following day.

“We’d be fit people, going to the gym a lot, and walking. We’re definitely still far from that. My partner still gets out of breath going up and down the stairs. It shows us how easy it is to pick up the virus, and had made us even more cautious than we were.”

King’s sense of taste came back after 11 days. Her partner didn’t lose his. She self-isolated at home for 12 days after showing symptoms, although 10 is the recommended length, and the farthest she has ventured since has been one trip to the supermarket.

“Depression was my first feeling. And I was also a little bit frightened. I didn’t know who else I might have given it to.” Cormac Moore (47), a Dublin-based musician, is talking about his response when he heard he had tested positive for Covid-19.

On Wednesday, December 30th, Moore developed a sore throat. “I thought it was a throat infection. I had a bit of a sleepless night.” He had a cough the following morning. “My wife said, ring the GP and do a test.”

On New Year’s Eve, he called his doctor. “I had no fever. It was more like a headcold, that kind of thing.”

The doctor referred him to the HSE for a test, which he did at 4pm on New Year’s Day; a Friday. At no point did he lose his sense of taste or smell, which have been indicators in other cases. Once he had been referred for a test, the family didn’t leave the house: there are two children, 13 and seven.

I felt like I had failed as well. I am the first in the family to get it

“I was convinced I didn’t have it. Until around Sunday morning, when I noticed I felt a bit dizzy. It wasn’t like a normal cold by then. And I felt a bit sick in my stomach.”

On the Sunday, his wife also reported having some symptoms. At 6pm on Sunday, January 3rd, Moore’s test came back positive; the news delivered via text message. There was a follow-up call from his GP the following day.

“The minute I got the positive result, it shocked me,” Moore says. “I felt like I had failed as well. I am the first in the family to get it. We worked so hard for 10 months not to get the bloody thing and now we have it, just by going about my business. I had zero craic this last year and I still got it. I wasn’t going to restaurants, or sheebeens or seeing friends.”

Moore has no idea how he contracted Covid. “Since the second lockdown, we haven’t been out; not eaten (out) or anything. It’s obviously so infectious now, it’s everywhere. I must have got it through community transmission. Maybe at the supermarket, but I don’t know.”

His wife has since tested positive. They had visited her parents on Christmas Day, before he developed symptoms, but they have not become ill.

Moore hasn’t got any more sick that what he describes as having a “bad headcold. If this is all I’m going to have, it won’t be too bad, but people do take a turn for the worst 10 days in. You don’t know until it’s over.”

Sarah is 49 and lives in Dublin in a household of five. “A household member had been contact traced via text,” she says. “I fell ill on the night of the December 28th. I had a night of fever; of being hot and cold, feeling very achey and fluey. I had been fine during the day, but during the night, the symptoms came on relatively quickly.”

The following day, December 29th, the other household member tested positive. He was asymptomatic, but went to self-isolate in a room in the house. He doesn’t know where he might have come in contact with someone who had the virus: he didn’t get a personal call from anyone, or any indication of where the other close contact had been, such as his gym. The message arrived via text.

“I woke up that morning and felt a bit pasted,” she says. She rang her GP and arranged to have a test the same day. The next day, the 30th, she received a positive result. She too self-isolated in a room within the house, and the remaining three members of the household kept within their own bubble for the duration.

“I only had fever for one night. The rest of the time, it was a feeling like a flu. Achey, a headache, tiredness. There was a feeling of heaviness right across my chest.”

I was so tired and achey. I felt I had to lie on my stomach to relieve my lungs

Worry consumed her; that she might develop more serious symptoms. “Worry is a real part of having Covid, because you know it can take sudden terrible turns. Even though I felt it wasn’t going to be worse than flu, it doesn’t stop you worrying about it getting worse a lot faster. You start thinking about hospital scenes. People who are older who get Covid must find it terrifying; that worry.”

To try to calm her fears, Sarah, upon discussion with her doctor, bought a pulse oximeter. This measures oxygen levels in the blood, and is a commonly used medical device. It cost €50. “If your oxygen levels are between 95 to 100, that’s a healthy level. It’s a very good early indicator of you are heading in the wrong direction.”

She measured her levels three times a day while self-isolating. The fact they remained steady helped her feel calmer.

“I still felt really rotten,” she says. “I was sleeping a lot. I was so tired and achey. I felt I had to lie on my stomach to relieve my lungs.”

She stayed in her room all the time, going downstairs only when there was nobody else in the house. “I went down with gloves on. When anyone came up to bring food, they were masked, and left it outside the door. I had my own plate and cutlery.”

When Sarah’s period of self-isolation ended, she went out for a walk. It wiped her out. She’s back at work now, part-time. “I still don’t feel great. I get very tired, and still find breathing difficult,” she says, adding that she doesn’t know what the long-term impact on her health might be.

(Sarah is not the interviewee’s real name.)