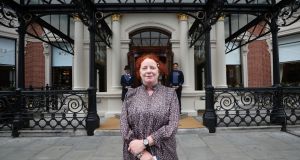 It’s so long since I used my Leap card that I clean forget to tap off the Luas at St Stephen’s Green. I’m going on my holidays in Dublin for the night. Specifically, at a hotel less than 3km from my home: the Shelbourne.

I’ve done countless interviews in the hotel’s Lord Mayor’s Lounge over the years. Brought my nieces for afternoon tea there. Drunk a lot of (excellent) Martinis in the No 27 bar. Met people during pre-Christmas madness. Gone to celebrate very good times – and, once, to attend a post-funeral reception. But staying there on a Monday in late June is not something I have done before.

So what does a five-star hotel reopening look like post lockdown? Covid-19 has not gone away, as we know. So all the staff are wearing black masks. It says something about how much life has changed since March that I catch myself thinking, Oh, they look quite elegant compared with some I’ve seen, including the one I wore on the Luas.

The hotel has 265 rooms. Tonight just 40 will be occupied, all by people from Ireland rather than abroad. ‘I’ve never been so excited about having only 80 guests before,’ the manager says

“We would usually be at full capacity at this time of year,” JP Kavanagh, the Shelbourne’s general manager, tells me. The hotel has 265 rooms. Tonight just 40 will be occupied, all by people from Ireland rather than abroad. “I’ve never been so excited about having only 80 guests before,” he says. The hotel has not dropped its prices, but they are prices usually found only out of season: a double room tonight with breakfast and parking is €299.

We are talking at a table in the No 27 bar, which no longer has the stools I normally sit on at the counter. They’ll be back some day, but not for the foreseeable future, alas.

Also gone are the squashy couches and armchairs in the lobby by the fire, where you’d sit and wait for your tardy friends to arrive. They’re gone from the reception area too. To compensate for the lack of furniture, the lobby has an astonishing wall of flowers; it’s like a botanical artwork.

My brain temporarily collapses when Kavanagh explains the complicated technology behind the new gadgets that sanitise the bedrooms, but the message is that everything is very, very clean. In fact, the prevalent (and not unpleasant) smell throughout the hotel is of cleaning products.

“And we have a toilet butler,” Kavanagh says.

Perhaps only the Shelbourne could transform the job of ensuring not too many people go into any of the hotel’s main bathrooms at once into something that sounds glamorous. So the toilet butler will ensure social distancing is maintained in the bathrooms that serve the restaurant, lounge and bars.

In my room – named after the writer Elizabeth Bowen, which pleases me enormously – every cushion, throw and end-of-bed decorative fabric has vanished. This may be the best thing about postpandemic hotel accommodation. No more spending the first five minutes shoving a million extraneous cushions into a wardrobe. (I am certain these items were laundered regularly at the Shelbourne, and equally, queasily certain they were not at some other hotels I have frequented.)

The spa is temporarily closed, but you can opt for a DIY treatment: the spa will arrange to leave some products in your room, with instructions – on an easy-to-sanitise laminated sheet – on how to apply which potion and lotion and what important things they do for your lockdown skin.

You can choose for a waiter to bring your food in the prepandemic way, and put it in front of you at your table, or you can be served tableside, with your food and glasses on a tray, for you to take and replace yourself

I have brought a friend on my Dublin holiday 3km from my own home, a friend I have seen only once in the past six months. We sally forth for dinner in the Saddle Room, unsure of what to expect.

It turns out that a booth, of which the Saddle Room has several, is a perfect place to socially distance from other guests. The menus are on paper, and service comes two ways. You can choose for a waiter to bring your food in the usual way – which is to say like in the Olde, Prepandemic Dayes – and put it in front of you at your table. Or you can be served tableside, where the waiter will put your food and glasses on a tray, for you to take and replace yourself.

Fabulous as it is to again experience the novelty of being served a top-notch dinner in an actual restaurant, it’s even more wonderful to be able to spend real time with a friend, instead of doing it virtually, via Zoom or FaceTime.

In the morning I am the only person in the hotel’s pool. I notice that in one respect the Shelbourne still thinks it is prepandemic times: the pool’s clock is still on winter time, the time it was back in March, when this extraordinary “new normal” era first began.